Subscribe
Home > Agriculture and Environment > Does the World Care About the Other Crisis Killing Koalas & Kangaroos?

As Australia’s unprecedented bushfires continue to rage, heartbreaking images of scorched koalas and charred kangaroos have devastated viewers around the globe. An estimated 1 billion or more animals have died in the fires, but it’s the pitiful photos of flame-chewed koalas being carried from the blaze like bewildered, beat-up babies that have perhaps most captured our collective sympathy and despair; along with images of beleaguered kangaroos, their normally genial silhouettes frozen in panic against a backdrop of roaring orange.

It is unbearable to witness.

Thankfully, these same images have also inspired millions of people to donate to rescue groups on the ground retrieving animals from the fires and tending to their injuries. But as the surge of combined sorrow and sympathy for these iconic animals swells around the world, I find myself wondering: What about the other crisis that is killing Australia’s koalas and kangaroos, and in even greater numbers?

The World Wildlife Fund reports an estimated 45 million animals are killed each year in the Australian state of Queensland alone just from bulldozing of their habitat, a crisis they note is “driven primarily by the livestock industry.” In just 4 years, between 2012 and 2016, bulldozing of trees killed at least 5,183 koalas in the state.

Queensland had the largest koala population on the continent in 1990, with an estimated 295,000; but in just 20 years that number decreased by more than 40%, while on the Koala Coast, 80% of these animals have been lost. Thousands of koalas continue to be killed each year as more forests are cleared for cattle grazing in response to consumer demand for beef. But it’s not just Queensland. In Australia as a whole, “beef cattle production is the major driver of tree-clearing.” Queensland RSPCA’s Mark Townend notes, “The mass suffering, injury and needless deaths of wild animals caused by the bulldozing of their forest homes is largely hidden but it is Queensland’s greatest animal welfare crisis.”

The same industry is also terrorizing and destroying kangaroos en masse. Since the year 2000, an average of more than two million kangaroos per year have been shot by commercial shooters for the meat industry. A 2018 Australian documentary, Kangaroo: A Love-Hate Story, chronicles the industry’s merciless targeting and slaughter of millions of kangaroos annually in order to keep them from competing for food, water and land used for cattle. As meat industry spokespersons say in the trailer below: “Our sheep and cattle are competing directly with kangaroos for their pasture.” “Kangaroos… are a pest that should be eliminated wholesale.”

A group of international academics have written a letter to the Australian government, expressing their dismay at the legalized harassment, targeting and wholesale slaughter of this unique species, noting that kangaroo “individuals, family groups, and populations are affected by this. For example, living in strong family groups (or mobs), large grey males are often easy to kill first because they stay to defend their mob against attack. Matrilineal lines and bonds are broken when large females are killed. Young at foot joeys are left without maternal care…

Some evidence suggests that up to 40% of kangaroos may be shot in the neck or body resulting in wounding and non-instantaneous death. Incredibly, the death of hundreds of thousands of dependent young annually is considered ‘collateral damage,’ with research confirming that most dependent young are left to suffer exposure, starvation, and predation…”

It’s not just koalas and kangaroos being devastated by Australia’s meat industry; and it’s not just Australia. The non-stop clearing of land to make room for more cattle, sheep, and other farmed animals, and to grow crops to feed them, has led to animal agriculture becoming the number one driver of wildlife habitat loss and destruction globally (Science of the Total Environment, 2015). The fires in the Amazon rainforest that triggered a similar wave of international shock and grief were also driven by beef production; fires are regularly set in the Amazon to make room for more cattle, and to grow monocultures of soy for ‘livestock’ feed.

Scientists say at least 80% of current deforestation in the Amazon rainforest is due to beef production; which is only being produced to keep up with consumer demand. 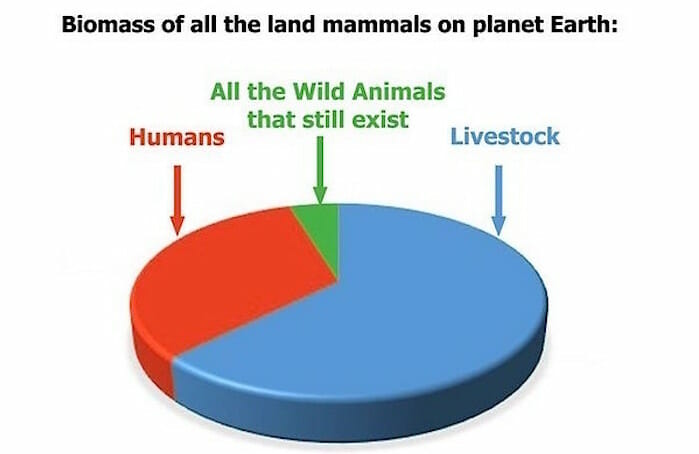 The graph above is from the book Harvesting the Biosphere: What We Have Taken from Nature, by Vaclav Smil, which looks at both the historical and current impacts of human consumption activities on the plants, animals, and other life forms that compose the Earth’s biosphere.

Among the most pressing of these is the impact to wildlife ecosystems that results from the disproportionate use of natural resources required to produce animal-based foods: it takes far more land, water, and energy to raise and slaughter some 70 billion land animals annually (and to grow crops to feed them) than it would take to grow crops to feed 7 billion humans directly.

In addition to the millions of free-living animals (including Australia’s koalas) being displaced and killed at unprecedented rates to make room for farmed animals and the crops grown to feed them, tens of millions of wild animals are brutally killed every year to protect the profits of animal farmers. Australia’s killing of kangaroos for the beef industry is just one of countless global federally sanctioned programs enacted to destroy native wild animals in order to keep them from competing with cattle, sheep, goats etc. for land, water and food; or to keep natural predators such as wolves, coyotes, mountain lions, bears, dingos and others from killing and eating the animals that humans (who have no need to consume them) breed into captive existence to exploit and kill for food.

In the U.S., millions of wild animals are targeted and brutally killed every year (via traps, neck snares, poison, aerial gunning and more) by a secretive branch of the USDA that is primarily employed to destroy wildlife deemed a threat to animal agriculture. In 2018 alone they killed 2.6 million animals, including 1.5 million native wildlife species. These kills include the following vital native predators:

Wildlife-destroying programs like this, in service of the meat and dairy industries, exist all over the world.

If We Truly Want to Help

And so my question to everyone who has been moved by the suffering of koalas and kangaroos, is this: What if meaningfully helping these animals means not just donating during a crisis, but changing your diet, as climate and environmental scientists around the world are urging us to do? Will you still act then?

This isn’t a criticism of anyone donating to help the animals harmed in Australia’s fires; please donate, and support rescue efforts in any way you can. But if you care enough to want to help koalas, kangaroos, and other animals suffering in these fires, then why knowingly contribute to what’s simultaneously, and needlessly, devastating and killing them— and billions of other animals to boot?

It makes no sense.

My hope is that if images of suffering koalas and kangaroos have opened your heart, then it will be open enough to see that there is no hope for these creatures, nor for our imperiled planet, unless our compassion is authentic and consistent, not selective and symbolic. If we truly care about animals, we can’t knowingly participate in systems that exploit and kill them.

Learn more at our Why Vegan? page. To support organizations helping animals affected by the bushfires, see this list from Animals Australia. And please sign and share their petition urging the Victorian government to implement food drops for surviving wildlife where they are needed NOW. With their habitats destroyed, and all sources of food gone up in smoke, survivors won’t live long without urgent government intervention.