Many of us who care about our planet and other species are turning more to independent media sources where we typically find more substantive discussions on important topics. We expect more transparent conversations over issues like climate change from those sources than we get from corporate media. But, for some reason, the bottom drops out, the substance vanishes, and the denial kicks into full gear as soon as the subject of animal agriculture’s impact on climate change comes up. For those of us who recognize the immensity of the problems caused by animal agriculture, watching this play out with media people we otherwise respect can be downright maddening and depressing.

In particular, there is a deafening silence about animal agriculture from the major spokespeople for the Green New Deal — perhaps the boldest initiative to combat climate change we’ve yet seen proposed in Congress. The resolution itself makes no mention of what we clearly now know from organizations like the United Nations about the devastating impacts of raising animals as compared to plants for human consumption. In fact, the only language in the resolution about agriculture calls for:

“(G) working collaboratively with farmers and ranchers in the United States to remove pollution and greenhouse gas emissions from the agricultural sector as much as is technologically feasible, including—
(i) by supporting family farming;
(ii) by investing in sustainable farming and land use practices that increase soil health; and
(iii) by building a more sustainable food system that ensures universal access to healthy food;”

In the absence of any clear position on the avoidable impact of raising animals from GND spokespeople like Alexandria Ocasio-Cortez and Varshini Prakash, right-wing conspiracy theorists are fabricating hysterical claims that GND wants to take away our meat, while progressive commentators are hitting back, reinforcing our culture’s denial and avoidance about eating animals, rather than taking the opportunity to honestly address its impacts. A case in point: Megan McCain on The View recently parroted the popular conspiracy that GND “wants to take away our cows and cars,” to which YouTube political commentator, Brian Tyler Cohen, argued that the elimination of cows is “just not possible” and GND doesn’t say there is any compelling reason to change our diets or reform food policies to reflect the facts on animal agriculture and climate. Not a word was spoken on either side of the aisle about what the real cost of animal products would be if we no longer subsidized the industry and forced it to pay for cleaning up its own environmental mess, rather than push it on to us.

While the spreading of lies and conspiracies about GND from the right is bad, the left’s justifications for why GND doesn’t need to seriously address the impact of “cows” is dishonest and steeped in self deception. The bottom lines is that, on both side of the political spectrum, the issue of animal agriculture’s needless impact on climate change is rarely being seriously discussed, to say nothing of the ethical obligations we have to animals.

Some vegan groups, like the Vegan Justice League, are already actively working on how to leverage the popularity of the Green New Deal and influence its leadership. A young lady who goes by the name of Sarina on her blog has also written an impressive open letter which you can watch her read. 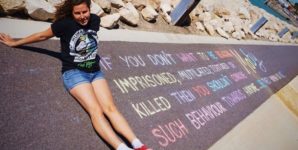 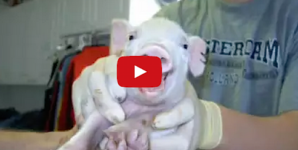 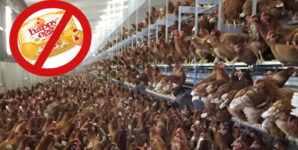