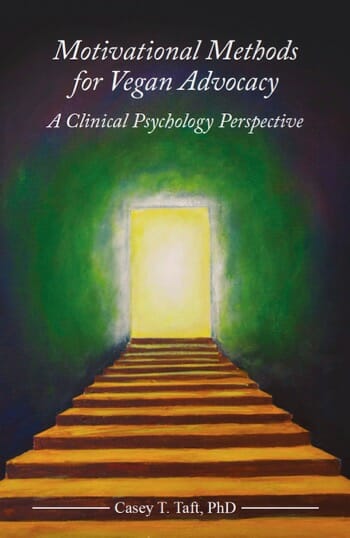 The following is an excerpt from author Casey T. Taft’s book, Motivational Methods for Vegan Advocacy: A Clinical Psychology Perspective.

A wealth of research in the field of motivation demonstrates the importance of long-term goal setting. (1) Importantly, goals need not be easy to attain in the short-term. In fact, the underlying premise of the widely studied and empirically supported “Goal-setting Theory” (2), (3) is that specific and difficult goals lead to greater behavioral change. Moreover, this body of evidence indicates that when we simply ask others to “do their best,” this leads to less behavioral change because it is difficult for one to engage in self-evaluation of their own change without a clear goal. (4)

Of course, one of the first things that any clinical psychologist will discuss with a new client during the initial visit is long-term goal setting. When working with violent clients, clinicians promote the end goal of being and remaining completely non-violent. A therapist would never set a long-term goal of ending only some violence, or ending only physical but not psychological violence. Once the primary long-term goal is stated, the client is then encouraged to come up with ways to achieve that long-term goal, such as better communication and tools and strategies for handling anger-provoking situations more effectively.

All of the large mainstream animal advocacy groups take great pains to reach out to non-vegans by enticing them with meatless alternatives, promoting “Meatless Monday” campaigns, cutting down on meat, etc., but they miss the most important component of any behavioral change strategy—a clearly defined end goal. It is surprising how rarely veganism is a stated goal in animal advocacy efforts. How can we expect people to go vegan on a large scale and minimize all forms of violence towards animals if it is rarely the objective of efforts intended to change behavior? We will have a very difficult time “tricking” people into going vegan by suggesting they cut down on meat or by offering tasty vegan food, and there is no evidence that this method is effective in effecting long-term, measurable change. If we want unnecessary violence towards animals to end and view that goal as a social justice issue, then veganism should be what we advocate for unapologetically. One need only envision an anti-domestic violence campaign that promotes “abuse-less Mondays” or “more humane abuse” to see how some methods of persuasion used for animal advocacy are not logical from a behavioral change or social justice standpoint.

No other behavioral change method (or social justice movement, for that matter) has suffered such a lack of a clearly identified end goal. If I were to suggest to my patients that a simple reduction of their violence towards women, or reliance on fewer abuse strategies, was acceptable and commendable as an end goal, I would be doing a great disservice to the victims and should lose my job. When I work with those who engage in violence, we work together to establish the goal of remaining non-violent. Again, if we want to see a specific behavior changed, ultimately end the violence, and help those affected, we need to be clear about what that behavior is and why it needs to change.

Reducing consumption of animal flesh and secretions is a step in the right direction so long that this reduction is part of an effort to go vegan. If we want to promote real change, we should be supporting these gains as much as we can, so long that we’re careful not to convey the idea that any animal use is morally justifiable. These should be viewed as steps towards veganism rather than ends in and of themselves. So, to be clear, supporting others working to reduce consumption of animal products is not necessarily poor advocacy from a behavioral change perspective, as long as this reduction is part of a strategy with the objective of going vegan, not simply cutting back on animal use as an end goal.

This is where mainstream animal rights groups get it fundamentally wrong. We should never compromise the vegan message by suggesting that anything less than veganism is acceptable or ethical as an end goal. That does great harm to the movement and to those who are attempting to promote true veganism and the end of all animal use. There is never a need to weaken our message, since all of the science tells us that having clear long-term goals is the best way to facilitate motivation and help bring about behavioral change. Our goal should be to work on motivating people to go vegan; then, once they have made the commitment to do so, we can help them take the steps necessary to get there. That is a true behavioral change strategy.

Many individual animal advocates and organizations fear promoting veganism as an end goal because they feel that if they’re too “pushy” they will lose people altogether. This is likely a leading factor in why a larger cultural shift towards veganism has not occurred. It is in fact possible—and optimal—to clearly state a goal of ending violence towards animals and work with non-vegans in a productive, non-aggressive manner to produce behavioral change.

Many of us (myself included) took many years to go vegan, and progressed from reducing animal consumption to transitioning to a plant-based diet and then veganism. Some argue that since they took a gradual approach, this is what we should be advocating for others. What they are missing, though, is that if they received clear vegan messaging to end all animal use, they may have gone vegan much sooner and prevented the deaths of many more animals. When we advocate for veganism as an end goal, people will naturally reduce their animal consumption, but will likely do so at a faster pace and will ultimately go vegan. Some will literally go vegan overnight.

Some animal advocates may also argue that it is simply more effective to ask people to cut down on animal use rather than asking them to go vegan. It is important to keep in mind that there is absolutely no scientific evidence for such claims, and this perspective is not based on any sound theoretical rationale for long-term behavioral change. In fact, such notions disregard a wealth of data showing that it is important to set clear long-term goals that involve a true discrepancy between that goal and current behavior. (5) In other words, it is counterproductive to “settle” for an easy-to-attain goal that the individual is likely to change without our intervention when we could be helping to set more challenging long-term goals to strive for, and that would represent truly internal behavioral change.

You might still be asking yourself, “That all sounds good, but what if the person I’m communicating with refuses to commit to going vegan?” My response is that I would expect the other person not to make that commitment when you first begin discussing veganism with them in particular. However, their resistance to committing to veganism does not mean that they are a lost cause by any means. Your communication with them may have helped stimulate some thoughts on the issue, and perhaps it will open the door to them having a follow-up discussion or conducting some research on their own. Few people go vegan after any one particular interaction, and we must not place too much pressure on ourselves to make others go vegan after any interaction. Making such a commitment is best thought of as a process…All that we can do is to help move them closer to choosing veganism, but we cannot force them to change, and we should not engage in desperate tactics such as asking them to reduce their animal use rather than promoting veganism because it is less conducive to long-term change.

We should also be mindful of our larger end goal at the societal level in our advocacy efforts. If our goal is to ultimately convince the world population that we must end all animal use, we should be treating veganism as an issue of social justice and should not encourage others to continue to think of animals as “products” for which we can continue to consume in moderation. We must be careful that our animal advocacy does not perpetuate oppressive views of nonhuman animals, which would ultimately be to their detriment. 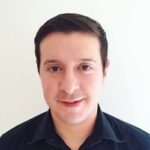 Casey is co-owner of Vegan Publishers and Professor of Psychiatry at Boston University School of Medicine. He’s an internationally recognized researcher in the area of violence and abuse prevention, winning prestigious awards for his work from the International Society for Traumatic Stress Studies, the Institute on Violence, Abuse and Trauma, and the Centers for Disease Control and Prevention. He has published over 100 journal articles, book chapters, and scientific reports. He has recently authored Motivational Methods for Animal Advocacy: A Clinical Psychology Perspective (Vegan Publishers) and Trauma-Informed Treatment and Prevention of Intimate Partner Violence (American Psychological Association). 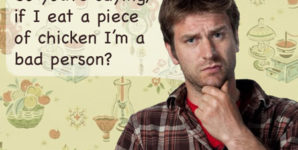 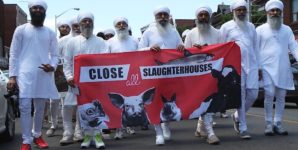