Subscribe
Home > Animal Cruelty Investigation > From Bacon to Holiday Ham: A Day in the Life

By now, many people have viewed the horrifying footage from Tyson Pork that Mercy for Animals released earlier this year. Or maybe they’ve seen the devastating abuse of pigs recorded at Christensen Family Farms, or at Hawkeye Sow Centers, or at Pipestone Systems, or at Iowa Select, or Smithfield Foods, or Hormel farms; the list goes on and on.

But even though investigations into pig farms by numerous animal protection groups reveal the same unspeakable cruelties committed year after year, the unabashed bacon fetish continues, in large part because people manage to convince themselves that these are isolated incidents of abuse; the exception, and not the rule.

While it’s certainly the case that farms exist where pigs are not maliciously beaten, body-slammed, and burned, the truth is that virtually all bacon, pork, and ham come from pigs subjected to excruciating mutilations without anesthesia or pain relief. These torturous procedures are all legal and routine, part of the standard practice known as “processing” piglets a few days after birth. These abuses are commonly inflicted on small and so-called “humane” farms as well (see below).

Most baby pigs have their tails cut off without pain relief. 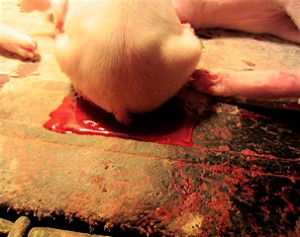 Although pigs are some of the smartest and most inquisitive animals on the planet — researchers rank them as more intelligent than three year-old children — more than 97% of pigs in the U.S. are raised indoors in barren warehouse-style factory farms. (1) Packed inside manure-laden sheds by the thousands, and unable to perform the most basic natural behaviors essential to their wellbeing, pigs suffer depression and anxiety and exhibit stereotypic stress behaviors including biting one anothers’ tails. In order to prevent tail-biting (which could result in infection and subsequent profit loss), farmers cut off one-half or more of piglets’ tails without anesthesia or pain relief.

Most baby pigs have their teeth broken off with pliers.

Newborn pigs have eight sharp “needle” teeth which can scratch their mothers’ udders, as well as other piglets. While these teeth serve an important purpose in nature, injuries caused by needle teeth can sometimes lead to infection or other damage that might result in profit loss to farmers. Pigs raised on industrial farms as well as many small farms have their needle teeth clipped in half with pliers, or even broken off at the gumline. See the 10 second video below.

Most baby pigs have chunks of flesh cut out of their ears. 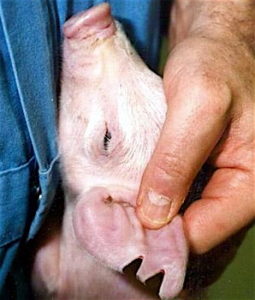 Ear notching is the most common method of pig identification (2). With a tool called a V-notcher (similar to a hole-puncher), triangles of flesh are cut from a piglet’s ear as though it were a child’s paper snowflake, rather than a sensitive appendage filled with blood vessels and nerves. Notches in the pig’s right ear represent its litter number. Notches in the pig’s left ear are its individual number. Under this system, every pig in a litter has the same notch(es) in the right ear, while no two pigs from the same litter have the same notches in the left ear. Pigs may have as many as five notches cut into a single ear.

Virtually all male piglets have their testicles ripped out (most without anesthesia).

Nearly all male pigs in the U.S. are castrated in order to prevent “boar taint,” a strong odor associated with the flesh from intact males, and considered offensive. (Boar taint is prohibited by food quality regulations in many countries.) Pigs are almost always castrated without anesthesia or any prior painkiller, as such measures are deemed too costly. Generally, a scalpel is used to make an incision over each testicle, the testicles are squeezed out, and are then either fully ripped from the body or cut at the spermatic cord.

Mutilations without anesthetic are also common on small and humane label farms.

While pigs raised on pasture generally experience a better quality of life than pigs raised in confinement, they are also subjected to brutal mutilations; especially cruel is the practice of nose-ringing pigs. Pigs are highly curious animals, and in natural settings will spend nearly half their active time exploring the surrounding environment. Their most instinctive and preferred exploratory behavior is rooting with their noses; the ability to root is considered a basic welfare need of all pigs. However, many farmers of free-roaming pigs complain that rooting destroys pasture. To prevent this behavior, farmers commonly insert wires or metal rings into the nose discs of pigs, which makes it painful for them to root. Scientists have confirmed that a pig’s sensitive nose disc has as many sensory receptors as the palm of a human hand. In addition to causing tremendous physical pain, nose rings are a source of ongoing emotional frustration for pigs, constantly thwarting one of their most instinctive drives. The distressing video below shows what is considered a “humane” method of nose-ringing pigs, while this video shows an even crueler method practiced on some small farms.

Pigs on small farms, free-range farms, and many humane label farms are also subjected to ear notching and castration without anesthetic. Even the most rigorous humane certification label in the U.S., Animal Welfare Approved, permits castration and ear notching of piglets without anesthetic. Here’s Karma Glos of Kingbird Farm, an Animal Welfare Approved humane producer, demonstrating her “pull and rip” method of castrating baby pigs without pain relief. (You can also see her humanely mutilating piglet ears, here.)

There are some who will object to the cruel practices depicted here, while maintaining that it is possible, with careful research and personal visits, to find truly humane farms that do not inflict such abuses. But proponents of so-called humane farms overlook a crucial truth. The main reason that abuse and torture of farmed animals happens is not because factory farming is corrupt. It is not even because Big Ag execs are greedy, or because factory farm workers are often desensitized and sadistic, though all of these are factors.

But the most important reason that abuse and torture of farmed animals happens is that consumers, including consumers of “humanely raised” animal products, are sending the message that it is morally acceptable to exploit, harm and kill animals for pleasure — for flesh and secretions we have no biological need to consume. You cannot pay people to inflict unnecessary violence on animals, and then make the case that those animals should not experience unnecessary suffering. It is a morally inconsistent, and therefore ignorable, position, one that it is easy for producers and most consumers to dismiss. Because if animals’ lives don’t even matter enough for us to spare them when we have plentiful alternatives, then on what grounds could their suffering possibly be said to matter?

As long as we treat sentient individuals as units of production, we’re doing nothing more than reifying the basic precepts of factory farming: that animals’ lives have no intrinsic worth, and that it is ethical to exploit and kill them even when doing so is not necessary to our survival. If we can look at animals as intelligent, loving and playful as our own cats and dogs, and think: Yes — but my desire for a fleeting pleasure is worth more than that individual’s entire life — then we can not make any meaningful arguments about how those animals should be treated. For it is no more humane to inflict unnecessary death on animals who want to live, than it is to inflict unnecessary suffering on those who wish not to suffer. Peace on earth begins on our plates.

There are plentiful delicious plant-based versions of all your favorite holiday foods — even ham. From do it yourself recipes to frozen store bought options, compassionate choices abound.

Check out Field Roast’s mouth-watering Celebration Roast, Tofurky’s Ham Roast with Amber Ale Glaze, or get creative and make your own savory centerpiece, like The Gentle Chef’s Vegan Holiday Ham (recipe in The Gentle Chef Cookbook).

And the news is even better for bacon lovers. Check out our feature, The Vegan Bacon That Meat-Loving Foodies Can’t Get Enough Of.

See also our Guide to Going Dairy Free for tips to easily eliminate dairy cruelty from your diet.

Get Our Newsletter
Posted In: Animal Cruelty Investigation
Tagged With: Humane Farming 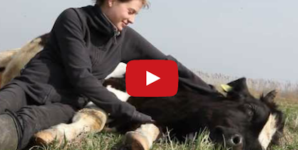 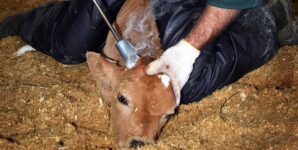 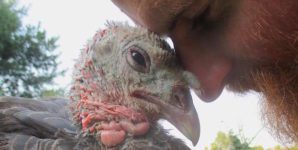