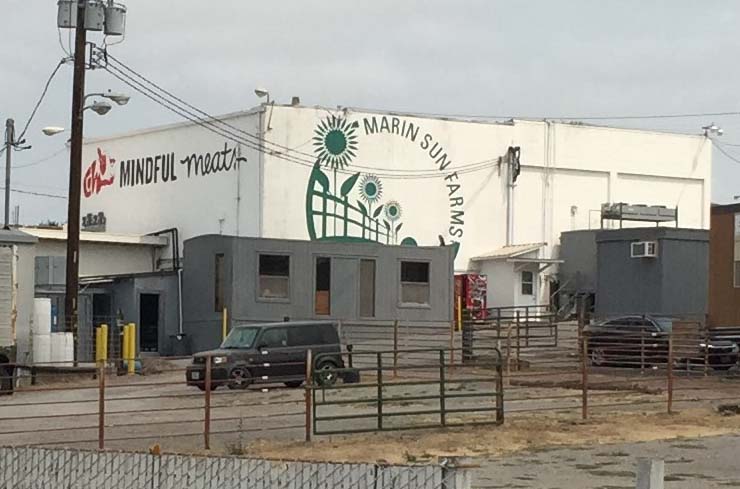 I live in ag country. When you drive around Sonoma County, especially getting out of any city just by a couple of miles, there are signs of animal agriculture everywhere. I often drive by dairy operations with signs posted that say “Real California Milk” and “Certified Organic Dairy,” as if appeasing the people driving by implying that “only good things are happening on this farm.” Yet if you look closer you may see rows and rows of white plastic calf hutches, like uniformed cartons of milk, each containing a tiny baby calf who was taken from her mother at birth, chained to the plastic hutch in all weather extremes–alone, frightened, and miserable. For each of these calves there is a grieving mother who will never know her baby, traumatized with each calf dragged from her after birth.

Most people have no clue what is truly going on inside animal agriculture, especially the slaughterhouse – that ominous place that ends all tomorrows for farmed animals. There is a slaughterhouse down the street from where I live in Petaluma on a major road just outside of downtown. For many years it was called Rancho Veal. Of course, veal has been exposed to be the poster-child of cruelty and most people now agree that confining a baby cow so tight that he can’t even turn around, then slaughtering him when he is just weeks old, is callous and cruel. But what people don’t realize is that most animals who are slaughtered for meat are just weeks or months old when they take their portentous journey to the abattoir.

Rancho Veal was recently acquired by Marin Sun Farms and received a fresh coat of bright white paint complete with their logo, looming two stories high, on the front of the building. On the west wall, facing the oncoming traffic heading to downtown, they added huge letters spelling out the name of a producer they’re in partnership with, “Mindful Meats.” When I first drove by this new sizable marketing endeavor, I had to pull over and take a moment for a figurative face-palm. Shaking my head, I pondered what I was seeing. It’s truly appalling and as a spiritual person, I am deeply disturbed.

The Implications of Being Mindful

The term “mindful” has recently come into the ethos of the west from Eastern religions and philosophies such as Buddha, Jain, and Hindu dharma-s (dharma can be thought of as “religion” or “tradition” although these traditions are different than Euro-American religious traditions). There are now books and podcasts and workshops on “mindfulness” generally stemming from the teachings of Buddhism and Hinduism around meditation and awareness of one’s self and one’s actions. These traditions tell us that to be “mindful” is to be aware of the present moment and sensitive that your thoughts and actions have reactions, for yourself and others. There is an implication of thoughtfulness, kindness, and gentleness that comes with the use of this term, for ourselves and our relationships.

Furthering the teachings of mindfulness, other ideas associated with Eastern religions are ahimsa and karma. Ahimsa literally means “non-violence” and conceptually may be understood as a positive principle of “dynamic compassion.” For many Eastern religions, ahimsa is the highest principle of ethical conduct and universal harmony and above all, one should not take the life of any sentient being. It is believed that all life is sacred and we have no right to take this precious gift.

Karma is also connected to being mindful as our actions have repercussions on ourselves, others, and the planet. Whether you are a spiritual person or not, many believe in some form of the adage, “what you do comes back to you.” Eating meat, dairy, and eggs has negative impacts on our health and producing these products is devastating the environment. A recent study found that meat and dairy surpasses fossil fuel production as the biggest polluter on the planet. Vegans can have a clear conscious that we are doing what we can to ease the suffering of animals. In the ancient traditions of the East, there really is no act associated with more negative karma than killing another sentient being. Our actions have consequences and killing conscious animals is not just considered wrong in Dharma traditions, it’s one of the worst actions someone can take, and will have devastating effects for a person’s spiritual development and cause significant suffering to the perpetrator. But more importantly, these teachings show that animals have the same spiritual composition as us. In other words, our differences are material and not as definitive of our true nature as our spiritual equality. Therefore, all sentient beings have the same right and desire to live, and we should respect and protect them insofar as we are able. Being vegan is the least we can do.

What the owners and managers of this business are implying by scrawling “Mindful Meats” on the slaughterhouse is that there is something different happening inside this building now, that they are being “mindful” when they are slitting the throats of adolescent animals. It is flagrant humane-washing. To imply that those who are killing animals for financial gain are being “thoughtful” or somehow “kind” or “careful” in that institution of hopeless horror is a vicious, insidious falsehood. Unfortunately, this is emblematic of a novel narrative strategy of propaganda attempting to put a new spin on a wretched practice. A fresh coat of white paint cannot cover the deep stain of barbarism and merciless violence that cowers beneath this bogus declaration of principled bloodshed.

The internet has given us a glimpse inside the slaughterhouse and if you have the stomach to search YouTube for “undercover investigations, slaughterhouse” this dark world is revealed with animals struggling to free themselves from the shackles that drag them to their death. Awaiting slaughter, their eyes are wide with terror as they hear and smell what is ahead for them. Workers kick, prod, punch, throw, and push animals, grabbing them and breaking tails and wings. The animals clamber on top of one another in panic, to try to get away, but there is no escape. After witnessing this, I cannot imagine what a nightmare this would be to experience and pray that a day will come where no animal suffers at the slaughterhouse. To pretend that there is anything going on for animals in that grisly place of death other than fear, panic, anxiety, pain, and distress is nonsense, and it’s insolent to the concept of “mindfulness” and those who embrace this tenant as a guiding influence of spiritual awareness in their life. Indeed, to ignore, endorse, benefit from, or participate in the anguish of the slaughterhouse is quite the opposite of “mindfulness.” It is truly insulting and deeply troubling that this term would be appropriated by the animal agriculture industry.

Some may argue that what we see in videos is not the norm, that it’s only a few “bad apples.” Yet every time an undercover investigator goes into one of these facilities, hours of footage of abuse comes out. It’s not a few bad apples, the entire barrel is rotten – that’s because it’s meat being produced, not apples. There is no humane way to take the life of an animal who doesn’t want to die. The “norm” is a culture of violence that begins with babies being dragged from their mother’s love and comfort, beaks seared off with a hot blade, other painful body mutilations without pain relief, stress, boredom, misery and then ends in the slaughterhouse with the same brutality in which their life began.

Meat marketers have always used words to sell flesh like “young” and “natural” and “fresh.” But the savagery of their industry has been repeatedly exposed so they are scrambling to find new words that ease apprehensions. Words like “mindful,” “humane,” and “happy” are simply new marketing strategies to appease concerned consumers, but as I reveal in my book, “The Ultimate Betrayal”, no matter the label, the industry standard is suffering, the customary is cruelty.

I long for the day when slaughterhouses are relics of a violent past. A day when we could never imagine the sick ritual of killing animal after animal, day after day, second after second. A day when we confront this industry with awareness, with mindfulness, of what the true cost of their bottom-line is, exposing the shadow of their euphemisms. A day when no human has to suffer the terrible trauma of working endless hours covered in innocent blood. A day when we see the awful irony of putting the word “humane” on a package of an animal’s severed body parts. When we are truly mindful we will come to realize the full consequences of consumer actions and see that all animals deserve to live free of human commodification and killing.

Get Our Newsletter
Posted In: Animal Products and Culture
Tagged With: cruelty, humane-washing, slaughterhouse