We recently discovered Rebecca Stucki, a California resident who has a pet-sitting and grooming business, on Free from Harm’s Facebook page, where she responded to a photo of a kid goat being dehorned without anesthesia. In her comment, she described how this image triggered her memory of being in animal agriculture classes earlier in her life. We were intrigued to learn more about what she was taught. Here’s our interview with Rebecca:

When and where did you take your animal agriculture classes?

I attended Pierce College in Woodland Hills, California, from 1999 to 2001. I started as a pre-vet major, but changed to veterinary technology after a semester, because it was a second degree for me (I was 40 when I started) and I wanted to be able to work immediately upon graduation without additional schooling and a huge financial debt.

How did your views change from the time you began the classes to the time they were completed?

Surprisingly little, I think. At least one of my classmates became a vegetarian after viewing a meat-processing film, but I was so fully indoctrinated by our culture that I just didn’t “get it” during the time I was in school, even though our school farm raised beef and dairy cattle, pigs, meat goats (Boers), and sheep. It never occurred to me to ask what happened to all the animals after they were born and as they aged. We knew on some level that they were being marketed, but my classes were limited to general animal ag, physiology, anatomy, and clinical procedures, and I was not involved in the production classes.

Were you surprised at what you learned? If so, what things surprised you the most?

I remember learning about sow crates, and that did surprise and disturb me. Most of my “aha!” moments came from a course in animal ethics, which touched on (but did not support, naturally) the positions of animal rights organizations like PETA and writings of philosophers such as Peter Singer (whom we didn’t read). Another difficult reality for me was learning about pathogen-free pigs who were born and lived their entire lives in sterile environments. That just didn’t sit right with me. However, it took me another nine years — and reading [Jonathan Safran Foer’s] Eating Animals — to finally convince me that animals are not ours to use or commodify. The thing that really got to me about that book was the descriptions by slaughterers of the just totally evil things they do to animals, simply because they can. I decided right then and there that none of my money would ever go to support such blatant cruelty, and I became a vegan over the course of a weekend — and never looked back.

What things did you learn that you think are least understood by the average consumer?

The realities of what animal production entails — the deaths, the “culling,” the breaking up of the animals’ social and familial structures, and most of all, the personalities and individuality of the so-called “farm” animals that most people haven’t experienced or even considered. We saw almost none of the negatives at the Pierce College farm. As far as living conditions went, the animals were fairly happy. They lived in family groups, on pasture, and were well-fed and cared for by adoring students. It certainly didn’t represent the reality of most animal agriculture, that’s for sure. I never saw, nor was I aware of, the shipment of animals to slaughter, and slaughtering was not done at the school, to my knowledge.

What kind of work are you doing now? Are you involved in any animal advocacy work?

I was a small-animal veterinary technician for seven years after graduation. I now own and run my own pet-sitting and grooming business (mainly for dogs and cats). I volunteer weekly at a large farmed animal sanctuary close to my home, and have set up and catered a showing of “Forks Over Knives” and a talk by Will Tuttle at my local library. I am currently in the process of starting up a vegan cooking class in my community.

What thought would you like to leave us with?

I’m embarrassed that the change to veganism took me so long, but I try to remember that when I do my own advocacy work. We need to keep wearing away [the objections to veganism] and disseminating information to the public, most of whom have absolutely NO awareness of the realities of animal production and commodification. 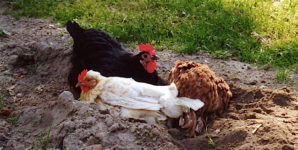 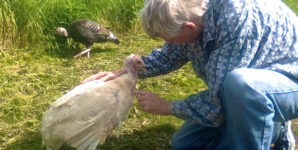