“Animal agriculture is a business making money on the bodies of other sentient beings. This can never be free of a fundamental insensitivity towards the victims of the industry’s profits and a deep betrayal to the animals who depend on humans for care. In the same way that one cannot own humans and traffic their bodies for profit in a humane way, it is impossible to humanely profit from the lives and bodies of animals.” — Hope Bohanec, author of The Ultimate Betrayal: Is There Happy Meat? 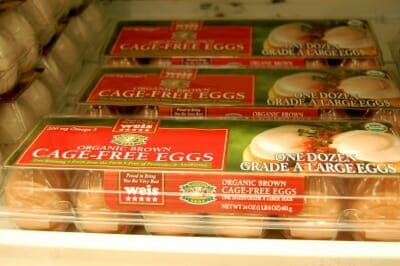 The Emergence of the Factory Farming “Alternative”

For most of my adult life, I have been engaging in conversations about animals raised and killed for their meat, milk and eggs. These conversations haven’t changed much over the last 25 years. I get the same, tired questions about protein and desert islands and plants feeling pain.

But recently, something has shifted. In the last few years, people have started to say things like, “Oh, but I buy free-range eggs!” or “My meat isn’t from a factory farm, my meat is local.” It’s almost as if all concern about the treatment of animals has been pacified by these new and improved “alternative” animal products. By purchasing these “humane” products people feel absolved from the cruelty inherent in the animal agriculture industry. They feel that there is an alternative now at the farmer’s markets and in the “slow food” movement and if they just pay a little extra money, they can “have their meat and eat it too.” Consumers are being lulled into a complacency where they think the animals are now happy and this new way of farming is actually beneficial to the environment. They have been led to believe that all is well in the mythical world of humane animal agriculture; and that is exactly what the producers of these products want them to believe.

The fact that people are becoming aware of the misery that farmed animals endure, and of the devastating impact of livestock on the planet, is a good thing. A growing number of consumers want to “know where their food comes from” and are willing to pay more money for alternatives to conventional animal products. This is a positive progression away from industrialized food production, so there is a hopeful side to this new industry reaction. However, there is a dark side as well.

Is the “Alternative” Encouraging a Return to Meat Eating?

The trend is quite popular in my little liberal community of beautiful Sonoma County, California just north of the Golden Gate Bridge. We were lucky enough to have a good size, all vegetarian natural foods store that has been a haven for vegetarians and vegans since the 70’s. It was a joy to shop there and not have to avert your eyes from bloody muscles on display or wince at the pungent odor of dead marine life. Many of us went out of our way and would pass up one or two Whole Foods just to shop there.

Recently, while humming around the store for my organic veggies and vegan ice cream, an enthusiastic employee told me that they were opening a second store. I was thrilled at first, but the excitement soon took an unexpected turn when I learned that there would be a meat counter. How could this be? The 4th word of the Market’s mission statement was “vegetarian”. I learned that because they were able to source “local, humane” meats, and there was such a high demand for these products, they had changed their mission statement and after almost four decades of vegetarianism, had decided to sell meat. The vegetarian community felt completely betrayed.

But we are not the only ones being betrayed. The farmed animals caught in this changing industry are the true victims. It is not the few differences between alternative production and factory farming that matter, but the startling similarities.

What Exactly is The Alternative to Factory Farming?

When we see a product with one of these new labels: humane, free-range, grass-fed, sustainable, etc. there is probably little difference between this operation and a conventional producer. Here’s what may be different. The scale of the operation is likely smaller and the animals are perhaps not in intensive confinement, i.e, cages, and may have some access to the outdoors. For a more detailed examination and definition of each label, and what they mean for the animals, please read The Ultimate Betrayal: Is There Happy Meat?

Some people think that the companies producing products with alternative labels are heroically defying factory farming norms and are the saviors of our food supply. The disheartening truth is that there is little distinction; the similarities far outweigh the differences. Most of the other horrors a farmed animal endures in animal agriculture still apply to any of these alternative labels.

For example, when someone buys eggs labeled “cage-free” or “free-range,” although they likely came from hens who aren’t in battery cages, these birds nevertheless are still overcrowded in miserable, windowless warehouses where the stench of ammonia is overwhelming. They are still painfully debeaked, brutally handled, and they still go to a terrifying slaughter at a young age. It is not cost effective for any egg operation to hatch their own chicks, so the babies still come from the harsh and heartless hatcheries where all male chicks are cruelly killed by the millions soon after hatching, as they are considered a waste product of the egg industry.

When someone buys dairy products with an “organic” or “humane” label, the cows were perhaps able to go outside for some of their life, but they were still artificially inseminated, kept pregnant their entire short lives, and were milked well beyond what was ever intended for their bodies naturally. Their calves were still taken away soon after birth, never to nuzzle their mothers or drink from their udders, or to frolic in a field. If the calves born to dairy cows are male, they are worthless to the dairy industry, and are sold at auction to be killed for veal, or perhaps for meat. If the operation is organic, sick and diseased cows languish untreated so the milk is not “tainted” with needed medications.

Animals raised for meat with a feel-good label have a similar story, frequently subjected to overcrowding and painful bodily mutilations: debeaking, tail cutting, ear notching, tooth filing or clipping, castration, and de-horning, all without pain medications. And they are all sent to a sickening slaughter in the very beginning of their lives.

Indeed, I would encourage the animal activist community not to use the term “factory farming” anymore because it implies that there is some “humane” farming alterative somewhere that counters the large-scale, industrial operations. By using the term “factory farming” animal activists have inadvertently contributed to a demand for “alternative” animal products. This is what we have been hearing in the shifting rhetoric of apologists for the animal agricultural industry when they say “I only buy…”

There are inherent cruelties in any kind of animal agriculture that cannot be eliminated with feel-good labels or descriptions of joyful animals who are supposedly happy till that “one bad day.” It is an industry-wide lie. Small or large-scale, the animals are never happy to be killed. There is no such thing as “happy meat.”

In these more recent conversations, I’m also hearing people say, “but it’s better for the environment” or “it’s more sustainable” as if the ecological concerns trump the ethical. People believe that a smaller operation or an animal having a little more living space is somehow better for the planet. However, this is a case of green-washing  labeling a product to make the consumer believe that it’s better for the environment when in fact there is little or no difference from its conventional counterpart. In fact, some cases of alternative labels are even worse.

People choose grass-fed beef because they believe it has a lighter ecological-hoofprint, but actually, grass-fed animals can produce 50 to 60 percent more greenhouse gas emissions than their grain-eating cousins. They can also use more water as their activity level is higher, especially in hot, summer months.

Free-range or pasture-raised animals are no greener. Most free-range situations, especially with poultry, are just a building packed with thousands of animals, with an opening the size of a cat door sometimes providing access to a small, unappealing concrete or muddy patio onto which no bird would want to venture. The environmental impact is unchanged.

However, if there is a transition to a truly pasture-based system, the same amount of animals will now use several more acres of land. At any given time, there are 100 million head of cattle and 70 million pigs alive in the U.S. Currently, only about 9 percent of all livestock is pasture raised. How would we ever have the land to pasture raise them all? To give all farmed animals the space they need to have even a semblance of a natural life, we would have to destroy millions more acres of wild areas, forests, prairies, and wetlands to accommodate them. There is not enough land on the planet, or even two planets, to free-range all the billions of pigs, sheep, turkeys, ducks, and chickens. We would need closer to five planet Earths. It simply cannot be done. Free-ranging animals for food can never be more than a specialty market for a few elite buyers.

We must end the commercialization of animals’ bodies, for the health of the planet, our own health and especially for the sake of the animals. When animals are still enduring such misery and sadness and have their lives taken at a fraction of their lifespan, “a little better” isn’t good enough. When animal agriculture is causing 51 percent of our human caused greenhouse gas emissions, wasting vital fresh water and polluting what is left, “a little less impact” isn’t good enough. No label will ever make it right to exploit, manipulate and rob animals of their right to live free of human imposed suffering and killing.

Here in Sonoma County, I have witnessed the supposedly “best of the best” operations with a range of feel-good labels and websites proclaiming theirs are the “happiest” animals. At these farms I have seen dairy cows in manure and muck up to their bellies staring out over a fence at green grass where they will never graze. I have seen the sterile rows of calf hutches where the baby females with wobbly legs are taken from their mothers with the area where their umbilical cord was cut still wet, separated and chained to what look like rows of white dog houses, frightened, sad and alone. I have seen over-crowed, debeaked chickens touted as “free-range” standing in a mud hole with green grass just over the fence. All these animals have a death sentence that will come much too soon. All animal farming is factory farming.

Get Our Newsletter
Posted In: Animal Products and Ethics
Tagged With: Humane Farming