The following is a response to the recent NY Times opinion piece by Rhys Southan, “The Enigma of Animal Suffering,” in which he concludes: “Exploitation is harmful only when the exploited are able to notice it and resent it.”

Some people outside the animal rights movement agree that inflicting suffering on animals is wrong, but challenge the notion that killing animals in order to exploit them is necessarily morally objectionable. Their premise is that if one could kill an animal for consumption without inflicting any distress or pain upon that animal, then the killing would not violate the interests of the animal. This is actually a position held by Peter Singer, the Princeton philosopher who authored Animal Liberation. Singer rejects the view that killing farmed animals is wrong, provided that the killing is truly painless.

In an opinion piece in the New York Times, one writer suggests, in line with this thinking, that consuming animals is morally distinct from atrocities against humans, because animals could — at least in theory — be raised and slaughtered without suffering any pain or distress. The writer, Rhys Southan, acknowledges that in the real world of animal farming — even in the “high welfare” sector — animals actually suffer a great deal, in part because babies are taken from their mothers (as is inherent in the dairy industry) and in part because animals are mutilated (branded, castrated, etc.) without anesthesia as part of “raising” them for slaughter. There is far more suffering implicated in creating (and therefore in consuming) animal products than Southan articulates, but even he effectively concedes that “pain free” animal exploitation (and therefore consumption) is, for the moment, a fantasy.

In his column, Southan cites Epicurus for the proposition that death is not a harm to the one who dies, because once someone is dead, that individual no longer exists to experience the putative harm. As Southan undoubtedly knows, though, Epicurus makes this point about humans. I address the (flawed) argument that death is not a harm, and that painless killing is therefore morally permissible, in a forthcoming book, and I discuss it as well in one of the chapters of Mind If I Order the Cheeseburger? And Other Questions People Ask Vegans, a chapter entitled “What About Plants?”. For purposes of the Times opinion piece, however, suffice it to say that if Southan embraces Epicurus’s view and infers permission to “painlessly” slaughter animals, then he should — by his own logic — infer permission to “painlessly” slaughter humans as well.

For now, however, let me leave this point behind. I will, for purposes of argument, assume a premise that I in fact reject — that painlessly killing animals (or humans) is morally unobjectionable. If this is true, what follows from it? It follows from this premise (one that I, just to be clear, find offensive and utterly reject) that if one were to consume the corpse of a slaughtered animal (for example, a puppy or a calf) who had been killed without experiencing any anxiety or pain, one would be doing nothing wrong. Likewise, as Southan implies at the end of his piece, one could also consume (or create gloves out of) the remains of a slaughtered human without committing any moral wrong, so long as the human never saw it coming and suffered no pain or anxiety.

Southan asserts that in theory, one could raise and slaughter animals for food without causing the animals pain or distress. This is true, just as it is equally true that one, in theory, could raise and slaughter humans for food without causing the humans pain or distress. This would especially be true in the case of a human who is either too young to understand complex human communication (through which she might learn of her fate) or a human who suffers from intellectual disabilities that prevent such understanding in adulthood. Under Southan’s argument, then, there would be nothing wrong with murdering a happy, intellectually disabled human being, so long as one made sure to sneak up on the person in the middle of the night and cause no suffering in the process.

After accepting this (dubious) premise, what follows? Though Southan does not say so explicitly, he strongly implies (in part by identifying himself as a “former vegan” in his byline) that what follows is that it is morally unobjectionable to consume animal products. Why does that follow? Because even though animals who are raised and slaughtered for consumption in fact suffer tremendous pain, anxiety, and loss during their short lives, as Southan concedes, one could imagine an animal being slaughtered for consumption without the corresponding suffering. In other words, the fact that one can imagine painless exploitation and slaughter is — on Southan’s theory — enough to make it acceptable to consume the products of painful exploitation and slaughter. Got that?

I would not spend so much time on this rather bizarre argument if this were the first time I encountered it. I would then conclude that Southan is simply confused and move on to other, better thought out, writings. The problem is that I have heard this line of argument before.

In one context, a woman who calls herself an “ethical vegetarian” and is otherwise extremely intelligent insisted to me that consuming eggs is morally acceptable (and totally different from consuming flesh) because the production of eggs need not involve killing animals. (By contrast to Rhys Southan, this woman does not appear to regard killing as harmless). I expressed disagreement with her claim, because in the actual world we inhabit, the production of eggs always involves killing. The male layer-breed chicks are, in fact, killed shortly after hatching, because they do not serve the purpose of an egg-laying operation, since they cannot lay eggs.

When people purchase “back yard” hens, the curiously absent males will have all been thrown into a meat grinder or other such device to make fertilizer the day on which they hatched. Buying eggs (or egg-laying hens for one’s backyard) is inextricably tied to that practice.

What I said did not seem to phase the “ethical vegetarian,” however, because, in theory, one could imagine consuming eggs without killing any male chicks. That is apparently enough, from her perspective, to justify consuming eggs in the real world, where male layer chicks are always killed as part of the process.

Ordinarily, as I said, I would not feel the need to respond to such an argument, any more than I would feel the need to respond to the argument, “But I had a dream in which an angel said that I should eat eggs.” However, because I have now heard the argument twice, I will make an attempt to say something in response, in the hope that people who believe it has some plausibility to it might think twice the next time they encounter it.

Let us take a context outside of the animal rights area, where controversy is less likely. Say I learn that all chairs coming from the Sandusky Chair Company were made by child slaves who were beaten and forced to work for twenty hour stretches. I happen to like Sandusky chairs, though, because they are very comfortable.

It is undoubtedly true that chairs could, in theory, be made without violently abusing enslaved children. In fact, not only could they be made that way but some chairs actually are made without such violence. Does this fact mean that I can go ahead and buy Sandusky chairs with a clear conscience? In other words, does the fact that one could in theory create a chair without beating child slaves translate into moral permission for me to go ahead and pay the Sandusky Chair Company for chairs that they do create by beating child slaves?

Some purchasers of Sandusky chairs might be ignorant about what is involved in creating those chairs and might therefore be innocent of the violence and cruelty that they are paying for. This is true, but once the reality is brought to their attention, they are no longer ignorant. And in the case of animal agriculture, it is becoming increasingly difficult to remain completely ignorant about the profound violence involved in creating every type of animal product, including (especially) products like chickens’ eggs and cows’ milk, which visit a special level of hell on the females of those species. And the “ethical vegetarian” of whom I spoke earlier is herself quite knowledgeable about the real world of eggs and dairy, even those that supply supposedly “humane and sustainable” farmers’ markets.

Ultimately, then, I must conclude that the “it could be done ethically in theory” argument is not really an argument at all but simply a (rather transparent) rationalization. And I say this as someone who takes seriously the many common objections to veganism in Mind If Order the Cheeseburger? And Other Questions People Ask Vegans. I would say that if something could be ethical in theory but is in fact unethical in practice, then that means that one is under an obligation, absent some truly compelling need, to avoid supporting that something unless and until the fantasy/theory becomes a reality. Though imagination can yield many wonderful things, it cannot justify behavior that is, in reality, unjustifiable. 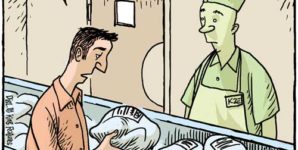 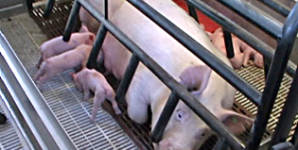 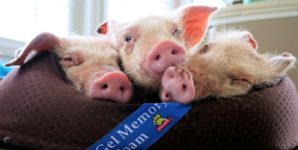