Over the last few months, I have repeatedly heard a peculiar claim articulated by a variety of vegan advocates on different vegan outlets. The claim is this: Even though it might seem that people consuming so-called humane meat, dairy, and eggs poses an obstacle to the movement for veganism, “research” shows that the opposite is true. “Research” shows that when people decide to purchase humane meat, dairy and eggs, this choice increases the odds that those same people will eventually decide to become vegan. When I first heard this claim, I was intrigued. Could it be that animal farmers encouraging people to purchase their “local, sustainable, and [allegedly] humane” animal products were actually helping the vegan cause?

The answer is that the research on which people have based this conclusion gives us no reason to imagine that so-called humane meat (including fish), dairy and eggs bring people closer to veganism. My own conclusion, based on a combination of logic, experience, and my own anecdotal observations, leads me to believe that in fact, the opposite is true, that encouraging people to consume so-called humane animal products poses a major obstacle to the continuing spread of veganism. But quite apart from what I think, the research that supposedly supports the utility of encouraging the consumption of humane meat and other animal products in moving people closer to veganism does no such thing.

Correlation is not causation

How can I say this? Well, let us consider what the research actually shows and why the conclusions people have drawn from that research do not at all follow from it. Here’s the supposedly revolutionary finding: It turns out that people who purchase animal products labeled “humane” (or “compassionate” or some other equally misleading adjective) may be more likely eventually to become vegetarian or vegan than are people who do not purchase these products. That is, there is a correlation between people buying animal-derived products labeled “humane” at point 1 in time, and people reducing or ending their consumption of animal-derived products at point 2 in time. 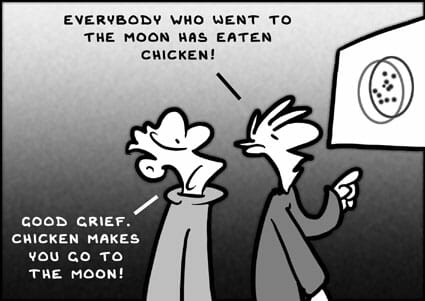 As everyone knows, a correlation does not necessarily indicate causation. But the problem with drawing the inference that vegan advocates have been drawing from the above finding goes well beyond the “post hoc ergo propter hoc” fallacy. Enter “selection bias.” Selection bias is the reality that people will often self-select to engage in an activity at time 1 and whatever motivated that self-selection can also fully account for the same people’s choice to engage in another activity at time 2.

Consider the following observational study. I observe that one group of people spends a lot more money at the grocery store on luxury items such as truffle oil and saffron than other people do. I decide to keep an eye on these people, because I want to know what the impact of all of this supermarket-spending might be. Eight months later, I observe that this same group of people is embarking on much more exotic and expensive vacations in places much farther away from home than other people who did not spend as much money at the supermarket as this group did. I conclude from these observations that buying expensive food at the supermarket helps enable people to be able to go on exotic and expensive vacations eight months later. Wanting to go on such a vacation myself, I immediately begin to spend a lot more money on groceries.

A very similar dynamic seems likely to be in play when we observe that the people who purchase  so-called humane meat, dairy and eggs at Time 1 are more likely than people generally to be purchasing only vegan products at Time 2. Buying supposedly “humane” animal flesh and secretions is something that many people do when they are driven to try to act more mercifully and ethically toward their fellow sentient beings. Years ago, before I became vegan, I tried to buy containers of cows’ milk (or what would more accurately be called the “lacteal secretions produced by a mother for her baby calf”) that said “grass fed” and “organic” on them, because I thought (erroneously, as it turned out) that this meant that the cows from whom the milk was taken (a) did not encounter human violence and cruelty during their lives and/or (b) were allowed to live out their lives in peace, eating grass, never having to be slaughtered. Eventually, I learned that my beliefs were nonsense (nonsense amply cultivated by those who sell animal products), and I made the decision to become vegan. It is hardly the case, however, that consuming (mis)-labeled animal products helped move me closer to veganism; if anything, it slowed me down by falsely assuring me that I was already “doing right by the animals” by avoiding “factory-farmed” products.

If you think about it, it is not at all surprising that people who feel moved to act ethically and mercifully toward animals will make up a disproportionate share of the people buying supposedly “ethical” animal products and a disproportionate share of the people becoming vegan. A third variable — consciousness about one’s obligation to refrain from inflicting unnecessary suffering on other beings — can fully account for people’s desire to do both things. Similarly, if you observe someone buying a vegan frozen pizza, such as Tofurky, at Time 1, you may be more likely than otherwise to observe that same person adopting a dog from a shelter (rather than purchasing a dog from a breeder) at Time 2. Yet no one would claim that eating a slice of vegan pizza causes a person to adopt a dog from a shelter. 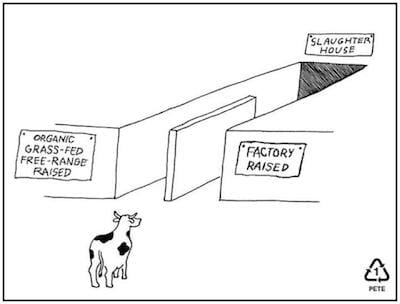 Ordinarily, it might seem harmless when people assume that performing act 1 causes a person to perform act 2, just because we observe that the same people who perform act 1 later perform act 2. But if the goal of citing this research about “humane” animal products is to alter the way that people conduct their advocacy, then it is anything but harmless. If someone tells me that he buys all of his flesh from a “humane” butcher and all of his lacteal secretions from a “humane” dairy farmer, this tells me that he is the sort of person who cares about animal suffering and wants to do what he can to reduce it. He has, however, been misled into thinking that what he is purchasing is the product of merciful treatment towards animals, when it in fact involves tremendous cruelty and harm to animals, and he is also (from a logical standpoint) less likely to become vegan than he was before, because he has managed to mollify his conscience by purchasing the “humane” product. Indeed, that is presumably why suppliers create the “humane” product in the first place — to keep animal consumers consuming animal products and to distract them from the actual humane alternative, vegan products. The purveyors of “humane” products could hardly be expected to label their products “humane” if they believed that such labeling would lead people closer to veganism.

I know that there are many people who are far more interested in the phenomenon of selection bias than I am and who have much more to say on the subject. I have nonetheless decided to write this post about selection bias, because I have felt an increasing amount of frustration upon hearing this claim about the counterintuitive results of “research” that should be altering the way animal advocates engage with the public. The research may tell us that the people who consume  so-called humane meat, dairy and eggs are, all things being equal, more likely to become vegan than the general population. But this plainly does not mean that consuming “humane” animal products moves people closer to veganism. And if you are hoping to take an expensive, exotic vacation, I would strongly recommend against spending large amounts of cash at the supermarket between now and your vacation time. You’re welcome.

Get Our Newsletter
Posted In: Animal Products & Psychology
Tagged With: Humane Farming 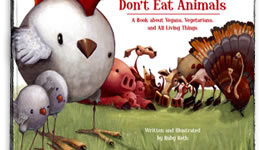 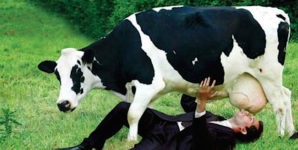