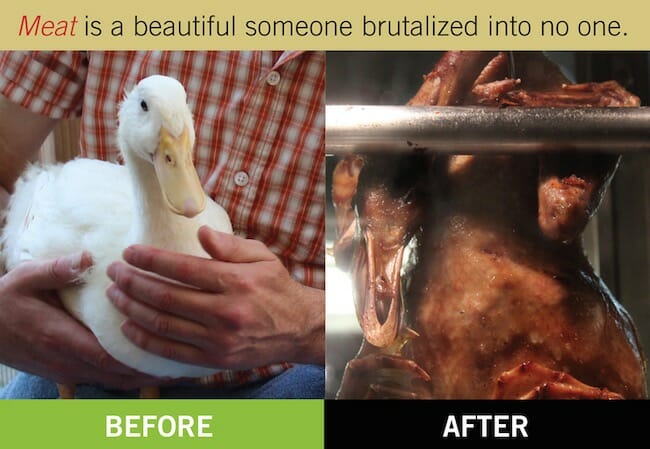 I’ve been thinking a lot about the use of the word “meat” lately, probably because everyone uses it, even those who care passionately about animals. Shortly after fostering two beautiful young ducks, a mated couple we named Ginger and Fred, I was on a bike ride running some errands and passed a barbecue restaurant with smoked Pekin ducks displayed in the storefront window facing the busy street.

Suddenly a concept came to me for a Facebook meme. The contrast between the beautiful someones we know as Ginger and Fred and the pathetic, disfigured and de-feathered corpse hung by his wings with his head and long bill cowering downward was so very powerful to me. At that moment the words I was searching for to describe this seemed to inadvertently pass from my lips as I uttered them out loud:

“Meat” is a beautiful someone brutalized into no one.

A young lady entering the restaurant heard me and thought I had addressed her specifically. She said, “Excuse me?” “And I said, “Isn’t it tragic to put dead animals who were violently killed for no good reason on display and to make their misfortune a conversation piece of our social gatherings?” She clearly wasn’t prepared for how to respond to this loaded question, and politely nodded her head in agreement as she passed by. It was one of those moments where you feel like you’re on the wrong planet.

Nevertheless, I remained clear on my idea for the meme: “Meat” is the objectification of a someone who had a mind equipped for functioning in a complex natural environment, finding the right mate, building shelters, giving birth, finding and storing food for the family, raising and educating young, negotiating and communicating with others in large social groups, learning from past events and anticipating future events, experiencing and expressing likes, dislikes, pains, pleasures, loves and losses.

But we also use the word “meat” to denigrate certain humans as well, such as when we refer to someone as a “piece of meat,” a piece of property to be controlled, trafficked and exploited for someone else’s gain. Author Carol Adams presents a pioneering analysis of this idea in her groundbreaking book, The Sexual Politics of Meat.

In my presentation Fictions, Facts and Food Choices, I highlight 23 fictional devices commonly used by the food industry and provide visual examples of each. One of them is objectification: the process of turning a someone into a something, the process by which we are conditioned to reduce a handful of animal species to pieces of “meat,” both conceptually and literally, and thereby ignoring who they really were as living someones. 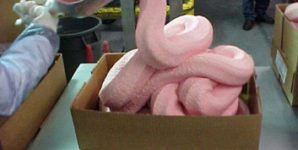 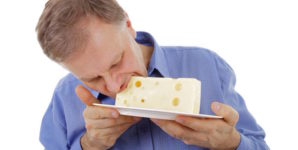 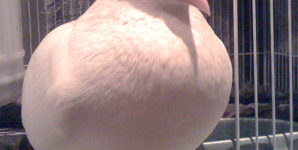