Subscribe
Home > Animal Rescue Stories > Ezra, the Chicken Who Survived the Most Unbelievable Odds, Needs You!

Ezra Survived Ritual Sacrifice and 7 Nights of Subzero Temperatures Without Food, Water, or Shelter. Will You Help?

Ezra is a strikingly handsome black rooster who was found in a cemetery by police after an eyewitness discovered him half-buried in the snow in front of a headstone. His legs were tightly bound with rope, to which had also been tied a small doll, ribbons, and a piece of fatty, raw meat. Ezra was likely the victim of a ritual sacrifice. He languished helplessly in this spot for at least a week or more, during two of the worst winter storms the Midwest has seen in years, all without food or water. He survived several days of subzero temperatures, dangerously cold winds and almost two feet of snowfall. It is truly amazing that he did not die.

Ezra is now hospitalized. His condition is serious but stable. He pulled through surgery today to remove parts of his feet that have developed gangrene. His pain is being managed with painkillers, and his systemic infection is being treated with antibiotics. We are grateful for the experienced avian vets who are considering prosthetic options for his feet to give him the mobility he would have with his own feet. They are passionate and committed to his success.

We’ve already arranged at least three options for permanent homes for Ezra, where he will be given all the care that a “special needs” companion animal requires.

Please give what you can to help cover Ezra’s medical and rehabilitation costs.

Any donation you make today through January 20th will be matched by a generous Free from Harm donor. And please remember, a gift to Ezra helps us advocate on behalf of chickens everywhere. We so greatly appreciate your support and generosity!

This video clip tells the really inspiring story of another rooster who looks a lot like Ezra who is named Cal. Cal suffered frostbite and lost his feet, but you’d never know it the way he gets around now! 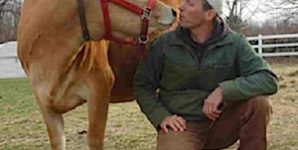 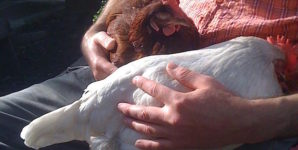