For me, the modern chicken industry is an expression of humankind at its worst. My visit last night to Ciales slaughterhouse in Bucktown to document the delivery of birds showed me nothing new, except for new victims whose expressions communicate a fresh pain, horror and despair that words fail to articulate. I know the expressions and behavior of happy chickens which makes the contrast even more disturbing. As we shine a light through the darkness on these birds’ faces and bodies, “I can’t imagine” thoughts flood my mind.

I can’t imagine how we could make someone more miserable or inflict more suffering.

I can’t imagine how we could engineer a domestic species from its wild counterpart in a way that so grotesquely robs them of all of the richness and complexity of their tropical rainforest lives and at the same time renders their bodies lethally obese in just weeks of being born.

I can’t imagine how we can raise birds only to be slaughtered at six weeks old, how we can grab them by their legs and stuff them into crates packed so tight, they are forced to squat in their own waste for hours and even days.

I can’t imagine how we can handle them so roughly during transport that they suffer from fractured wings and legs, bruises, and open wounds.

I can’t imagine that we can haul them around in trucks that offer zero protection from the extremes of of cold, heat, wind, rain and ice, that we can deny them any food or water or any comfort an infant animal might yearn for, that we allow many of them to arrive dead from heart failure, hypothermia, dehydration, starvation and heat stroke due to this grueling journey from one hell to another hell.

I can’t imagine how we can try to deceive ourselves by calling the “kill cone” method of slaughter “humane:” stuffing a bird head-first down a metal cone, pulling their necks through the bottom opening, and slashing their throats while fully conscious, while their bodies thrash and they suffocate in their own blood.

I can’t imagine how we can allow this atrocity to even exist in the 21st century. Shut them down! 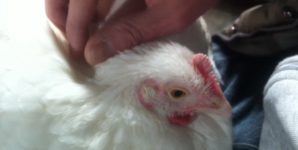 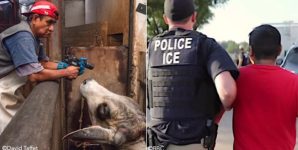 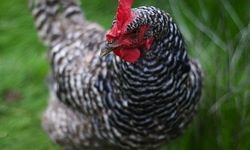