A hog farmer from New Taipei City’s (新北市) Linkou District (林口) has transformed his farm into a real-life “piggy paradise” where pigs are not raised for meat, after he was struck by the woeful eyes of a piglet which was going to be slaughtered. “Animals are our friends, not our food,” said 34-year-old Lo Hung-hsien (駱鴻賢), the owner of the pig sanctuary, who is also a vegetarian advocate and a part-time volunteer.

In an effort to cover the huge overhead costs of managing the non-profitable ranch, Lo holds down multiple jobs, including working as a cargo driver, setting up temporary stalls at night markets and running an online business selling dumplings.

Aside from his salaried jobs, Lo also squeezes in time for his advocacy work to promote the benefits of a vegetarian diet, volunteer at schools and give free speeches at the Tzu Chi Foundation.

Exhausting all his hard-earned money on raising his family and “piggy friends,” Lo said that despite all the criticism he has received for his decision to change how the farm was managed, he will still hold on to his beliefs even if it left him penniless.

Before his change of heart, Lo said that he had been a profit-driven pig farmer who inherited his family’s large-scale, lucrative farming business from his grandfather. Lo said that at the business’ peak, his farm could accommodate 500 pigs and raked in substantial revenue that was far more than he could spend.

Recalling the moment that transformed him from a moneymaking pig farmer to a vegetarian who regarded his farm animals as close companions, Lo said it was a piglet that was about to be butchered that changed his perception of pig farming.

Lo said that at the time, a staff member from a slaughterhouse had gone to his farm to single out a few hogs, prompting the terrified animals to start wailing. “Except for one piglet, which abruptly quieted down when I took it in my hands and then it looked me right in the eyes, as if saying: ‘How could you do this to me?’ That look in its eyes shattered me and kept me awake all night,” Lo said.

“It was then that I resolved to convert to vegetarianism and cut off cooperation with any butcheries,” he said. Over the past few years, only forty out of the hundreds of hogs survive, while the rest have succumbed to old age or disease, but Lo still spares no effort in attending to his pig companions.

Lo starts his day at 4am each morning, driving to a number of vegetarian restaurants to collect their leftovers, which are first cooked before being fed to his treasured pets.

Afterward, Lo cleans up the pigpens and washes and plays with the hogs attentively, as if they were his children. He has also sprayed the slogan “animals are our friends, not our food” on his truck because he wants to spread the seeds of his beliefs wherever he goes.

Go directly to the source of this story on the Taipei Times website.

Get Our Newsletter
Posted In: Animal Products & Psychology, Animal Rights 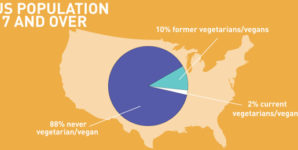 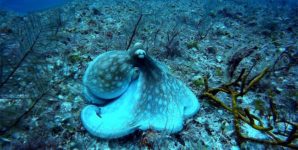 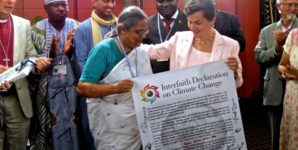