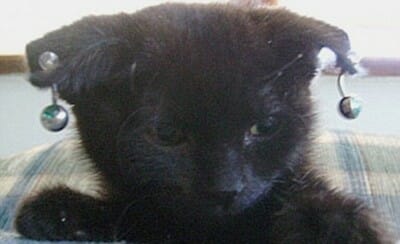 Last month, Governor Andrew Cuomo signed into law a bill that will generally prohibit the tattooing and piercing of one’s companion animals, through an amendment to New York’s Agriculture & Markets Law. According to the governor, the bill, which will go into effect in a few months, is “common sense legislation” intended to address “animal abuse, plain and simple” and “end these cruel and unacceptable practices in New York once and for all.” In this column, I will examine the impetus behind the law and what we can learn from what the law does and does not do.

What Motivated the Law?

The sponsor of the tattoo bill, Assemblywoman Linda Rosenthal, said that what first drew her attention to this issue and led her to introduce the bill was the case of a Pennsylvania dog groomer who was discovered selling kittens online. The groomer had pierced the ears and down the spines of the kittens he was selling to make them look “goth.” Another story that drew public attention to the practice of tattooing companion animals a few years later was a photo that a Brooklyn tattoo artist posted of his dog bearing a heart-shaped tattoo that included an arrow and a ribbon.

The tattoo artist asserted in his posting that his dog was “cooler” than other people’s dogs, in part because of the tattoo in question, which read “Alex” and “Mel.” Assemblywoman Rosenthal thought that instances like these highlighted the need for a law to protect animals from being harmed by the aesthetic and otherwise trivial whims of their human owners.

A potential reaction that one might have to this law is to wonder whether the tattooing of one’s companion animals is sufficiently common to merit a special law addressed to eradicating the practice. In more vernacular terms, one might ask, “Is this [the tattooing or piercing of one’s companion animals] really a thing?” To the extent that it is relatively rare, it might appear unnecessary to pass a law to prohibit and punish it (with a fine of up to $250 and a jail term of up to 15 days).

It may, however, be the very rarity of the practice targeted by the law that allows us to learn so much about people’s conflicting motivations. Let us consider what the law tells us about people’s inclinations toward nonhuman animals.

Not a Controversial Law

First, because so few people consider the tattooing (or piercing) of companion animals an important or valued entitlement, it was probably not difficult to garner enough support for the law to pass. There are not huge numbers of wealthy or powerful constituents likely to threaten to withhold campaign funding or otherwise create obstacles to the reelection of any politician, on the grounds that the “nanny state” has interfered with “pet owners’” right to tattoo messages onto their dogs and cats. Instead, most people who have any reaction to the practice of tattooing an animal are likely to view it as bizarre and deviant and, accordingly, an unjustified harm against a living being in someone’s care.

The law, then, is a “warm and fuzzy” measure that helps people to feel good about their sensitivity to nonhuman animals and their willingness to stand up to the gratuitous cruelty that some peculiar individuals choose, for reasons of vanity or other foolishness, to inflict on helpless animals.

As important, however, as the relative ease with which one might introduce and pass such legislation is the impossibility of passing legislation that applies the logic of the tattoo law to practices that involve more than just a small and uninfluential sector of the population (i.e., the few people who want the “right” to tattoo or pierce their companion animals). Consider one example of the law I have in mind. 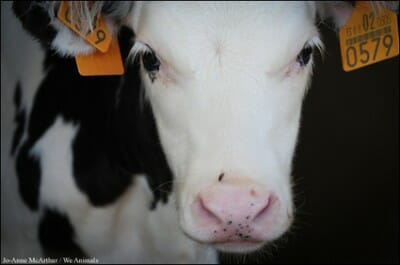 It would be impossible to pass a law prohibiting the consumption of flesh (what most people call “meat,” “poultry,” and “fish”) and hormonal secretions (what most call “milk,” “yogurt,” “cheese,” and “eggs”). Why is that? The reason is that about 98 percent of the population regularly consumes animal-derived products like these.

To introduce an anti-flesh and anti-secretions bill into the Assembly (or indeed into the legislature of any state or Congress) would represent a complete non-starter. It would mark the assemblywoman or representative sponsoring it as an enemy not only of the huge industries that supply animal products to people’s grocery stores and restaurants but also of the other enormous industries that supply “feed” for the “livestock”—that is, living and sentient property—which makes up most of the grains grown in this country and takes up most of the land used to grow crops here. A law prohibiting the consumption of animal flesh and hormonal secretions would have no chance of success in today’s climate because it would run up against the habitual, profitable, and unexamined practices of both lawmakers and their constituents.

It might be tempting to try to add another reason for the certain failure of a law of the sort that I describe above. Some might say that such a law would be confronting benevolent or justifiable behavior, by contrast to the law against companion animal tattooing, which confronts pointless cruelty. But it is useful to resist the temptation to draw this distinction and instead to take a look at how similar in logic such a law would really be to the tattoo law (and to animal cruelty laws more generally).

Most people consume animal-derived products, including the flesh of slaughtered pigs, cows, chickens, turkeys, and fishes, along with the lacteal secretions of baby calves, goats, and lambs (the dairy that grieving mother mammals produce after forcible insemination and the removal of their infants after birth) and the ovulatory secretions of hens (whose male chicks have all been killed at a day old). People who eat in this way get calories from these so-called “foods,” and it is true, as consumers might assert, that people need calories to live. It may thus seem to them (and to some readers) that consuming the flesh and secretions of animals has a beneficial purpose, while the tattooing of companion animals does not.

Consider, however, the fact that this argument (i.e., that supplying calories is good, because people need calories) would apply as effectively to the consumption of human flesh and human lacteal secretions (the latter of which, fascinatingly, seems to disgust people who regularly consume bovine lacteal secretions). Just because some food source, whether human or nonhuman in origin, provides calories, does not make it “necessary” or even beneficial in any sense, so long as other, non-violent and healthful food sources exist, which they do in this case. Millions of people all over the world, including infants and children, pregnant and nursing mothers, and male and female adults, live well and thrive on a vegan diet, without having to consume any animal-derived foods.

The preference for animal-based foods is therefore exactly that, a culinary preference, rather than a need that could logically and morally trump the profound interest of every living, feeling being in avoiding the violence of confinement, mutilation, separation from one’s children, and slaughter by those to whom consumers of animal products daily delegate the cruel and bloody violence inflicted on animals in the name of food. To quote from the justification memo for the tattoo legislation, animals — including those billions living on our animal-death-rows called “farms” — are “a vulnerable population, as they have no means of expression and must live on the whim of their owners.”

As someone who used to both care about animals and simultaneously and obliviously consume the products of animal slaughter, in the form of meat, fish, dairy, and eggs, I can relate to the desire to distinguish between tattooing a companion animal and biting into a slice of dairy cheese pizza. An earlier me would have said “tattooing your pet is just stupid, but eating is necessary.” But everyone who inflicts cruelty on an animal has some reason for it, no less elevated (and no less “necessary”) than culinary habit.

For the “pet owner,” the tattoo undoubtedly has meaning and may even reflect the owner’s affection for his companion animal. One of the events highlighted in discussions of the New York bill involved the tattoo artist who thought his dog was “cool.” He tattooed a seemingly loving message on the dog while she was undergoing a medically indicated surgery, so the dog was not even conscious of the tattooing.

If the dog owner in that case were a dietary vegan, he could have convincingly argued that unlike people who — utterly unnecessarily — consume the products of animal torture and slaughter because of habit and taste preference, his act of tattooing was specifically oriented around his warm feelings for his dog, did not cause the dog any pain, and certainly did not take his dog’s life. And he would be right in making this argument, though critics of animal tattooing and piercing would be right nonetheless to regard the tattooing of animals as wrongful and unjustified.

Most laws regarding animal cruelty are somewhat more general than the tattoo law, but they all share the trait that our hypothetical dietary-vegan-tattoo-artist implicitly criticized above. They all identify some particular cruelty against animals to prohibit, because there is perhaps less of a constituency for that particular form of cruelty than for others, and they then prohibit that cruelty while not only permitting but positively endorsing the vast majority of gratuitous daily animal cruelty that supplies the consumption items that most of the population regards as “food.” At the same time, the “individual right to eat what I like” sort of claim that some people make to support their animal consumption practices would readily extend not only to the behavior of the dog tattooer or kitten piercer but to any other violent practice that people in a moral society would see fit to stop. Violence is regularly experienced by the perpetrator as an expression of his freedom; that perspective is hardly unique to the consumption of animals and their secretions.

It is when we have no personal investment of habit to defend that we are best able to see the true cruelty and violence involved in a practice in which others are still participating. That is unquestionably why so many people do support anti-animal-cruelty legislation and why so many are outraged by images of needless animal suffering in a variety of contexts. But the more challenging and more important step is realizing that there is no principled difference between the behavior that we protest and oppose, on the one hand, and the behavior in which we regularly engage, on the other.

It is all essentially pointless violence against vulnerable and innocent animals who are entitled to protection from that violence. Realizing this is what led me to become vegan just under nine years ago. And the violence can stop, if each person who findsany anti-cruelty law well founded embraces the truth, that there is cruelty in every animal-derived ingredient that people consume, and that there is no justification for any of us to be funding it through our consumption habits anymore.

Sorry, there was a YouTube error.
SEE ALL VIDEOS