The National Chicken Council, which represents the U.S. chicken industry, has released its 2014 update of the NCC Animal Welfare Guidelines for the humane treatment of the nine billion chickens raised for meat each year in the United States. Rather than advancing animal welfare, these guidelines, first formulated in 1999, outline industry practices that are neither healthy nor humane.

For example, the guidelines allow a concentration of atmospheric ammonia in the chicken sheds as high as 25 parts per million, even though 20 ppm of this toxic gas burns the eyes, skin, and respiratory tracts of the chickens and weakens their immune systems by being absorbed into their bloodstream. Afflicted birds rub their heads and eyelids against their wings trying to ease the pain. The skin on their stomachs and legs ulcerates in the ammoniated manure they sit in, and respiratory illnesses are chronic and ubiquitous.

The ammonia arising from the decomposing uric acid in the manure harms not only chickens but poultry workers, who experience eye, lung, and nasal irritation, headaches, nausea, wheezing, coughing, phlegm and other respiratory symptoms, as ammonia absorbs easily into the mucous membranes of both birds and mammals.

Adding to the ammonia, the NCC Guidelines recommend lighting in the chicken houses amounting to virtual darkness. The purpose of the dim lighting is to limit the birds’ movements to getting up only to eat, drink and sit down again in order to accelerate weight gain. Once again, chickens and workers suffer the effects. Former North Carolina poultry farmer, Mary Clouse, told me, “The dim light bothers farmers who are accustomed to working out of doors in bright sunlight, and it also seems unnatural to raise any living animal in the dark all the time. It is difficult to see the birds, and sudden light or a flashlight frightens them into piling up, causing injuries and suffocation.”

By the time the chickens are five weeks old, their weight has multiplied many times over and they sit on their crippled legs, 20,000 or more birds crammed on the manure-soaked floor of a 500-foot-long shed, alongside five or more identical sheds, breathing air that is thick with pollutants and pathogens. To a person standing in the doorway of one of these sheds – as I have often done on the Eastern Shore of Virginia, Maryland and Delaware, where at any given time a half a billion chickens are confined – they look like lumps of dough laid out in the gloom. Their only value to the chicken industry is as raw material for processing into final products.

These products are pathogenic. Periodically, Consumer Reports publishes the results of tests they run on raw chicken. In 1998, CR found harmful bacteria, chiefly Salmonella and Campylobacter, on 71 percent of store-bought chicken, including “free-range” and “premium” brands. They warned that the U.S. Department of Agriculture’s seal of approval “is no guarantee of cleanliness.”

In 2007, Consumer Reports announced tests on 525 chickens purchased from U.S. supermarkets and specialty stores in 23 states. Eighty-four percent were contaminated with Campylobacter and Salmonella bacteria. What was more, 84 percent of the Salmonella and 67 percent of the Campylobacter bacteria showed resistance to antibiotics including “multiple classes of drugs.”

And now? In The High Cost of Cheap Chicken in Consumer Reports, February 2014, we learn that 97 percent of 300 chicken breasts purchased by CR investigators in stores across the country, including organic brands, contained dangerous bacteria. More than half were contaminated with feces and about half tested positive for antibiotic-resistant bacteria. The article recaps the 2013 Foster Farms outbreak of Salmonella Heidelberg noting that this outbreak put about twice as many people in the hospital as usual. The Centers for Disease Control and Prevention’s most recent data show more deaths attributable to poultry than to any other food product.

As far back as 1987, U.S. Department of Agriculture official William H. Dubbert told a poultry symposium at Colorado State University: “We know more about controlling salmonella than we are willing to implement because of the cost factor.” In 2007, an article in the trade publicationWATT Poultry USA observed, “We all know that pathogens of all forms, such as bacteria, fungi, and viruses, are everywhere in the animal production environment and will remain, regardless of techniques adopted.”

Industry’s “stopgap” response to the squalid poultry production environment and microbial density that squalor generates is to bathe the birds, after slaughter, in a wash of chlorine and other toxic chemicals, including the extremely dangerous chemical, peracetic acid. A report inThe Washington Post in April 2013 explained how fewer federal inspectors, other government cost-cutting measures and faster line speeds have all conspired to boost the use of toxic chemical sprays and soaks to kill the bacteria in chicken – with no guarantee of success.

Things are set to worsen as the global scale and speed of production increases. But here is a constant: Pack living creatures into filthy sunless places, feed them the lowest of “feed-grade” ingredients – a primary source of Salmonella, avian influenza and other diseases in poultry – subject them to multiple simultaneous stressors that Nature never intended for them to have to cope with even singly, and sickness of body and spirit will follow. There are laws of Nature, and we are violating these laws in our mistreatment of chickens with predictable results. The poultry industry is not likely to clean up its act, but we can wash our hands of the mess, and eat nourishing meals that are chicken-free.

Get Our Newsletter
Posted In: Animals and the Law
Tagged With: Broilers (meat chickens) 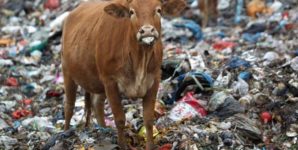 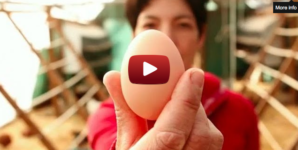 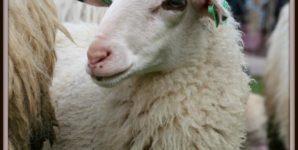