In my book, Farm to Fable: The Fictions of Our Animal-Consuming Culture, I begin the exploration of fictions in chapter 3, The Foundational Fictions, with a discussion about consent. The following is that excerpt from the book.

Consent: from Folklore to Assumption

All too often, farmed animals are portrayed as willing participants in whatever it is we want to do with them. By portraying the relationship between farmer and the animals he exploits as consensual, we, as the consumers of his products, are misled into believing that other animals don’t mind being used against their will, thereby reducing the issue to one of how we treat them. This has led not only to a wholesale denial of the value of their lives but also to a depraved standard of treatment we call “humane,” which, if applied to our cats and dogs, would be considered torture and even sadism.

And not only do we portray them as consensual, we embellish this fiction by portraying ourselves as their benevolent masters and protectors. We suggest that animals are elevated by the honor of serving us in exchange for our hard work in raising them, much like the honor bestowed upon a soldier who serves his country. Our language affirms this. We never say that we take their eggs, their secretions, their bodies or their lives. Instead, we claim that they give them to us.

As evidence of just how consensual this relationship is, exploiters will often point to their animals and say things like, See how calm or content they are? They do not resist, are not aware or don’t care what happens to them. But the whole point of what we call domestication is to mold animal bodies and minds into this state of subservience. The domestic animal today is the result of thousands of years of systematic capture, confinement, and intensive breeding for desired traits to break the spirit and reduce one’s worth to that of a piece of chattel property.

In his book, An Unnatural Order, Jim Mason explains that the “control and manipulation of animals — their numbers, sizes, and shapes — became almost an obsession in herding cultures. In time, control came to be valued in and of itself. It was the way of the Good Shepherd, a patriarchal model for the guilt-free exploitation of animals and natural processes.” (1) 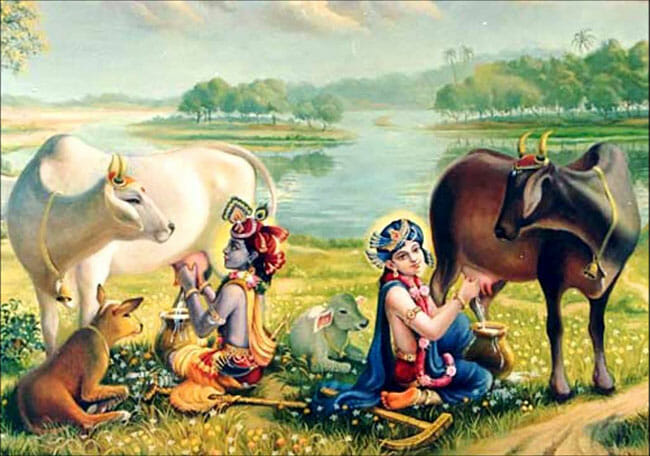 Fictional representations of consensual animal subjects precede recorded history itself and cross most cultural boundaries, which is not surprising since animals have been exploited for food for some ten thousand years or more. In Hinduism, in the popular depiction of Krishna milking the sacred cow, the cow willingly gives her milk to Krishna just as she would her own offspring.

In this tradition’s most important stories, the female lactating cow becomes both a symbolic and literal source of nourishment and mothering to the human race, as if to suggest that we need this maternal protection into our adult lives. The sacred Hindu cow is Mother Earth. In ancient texts, Krishna describes the cow as she who elevates human civilization and connects us to the divine. Drinking her milk seems almost akin to drinking the blood of Jesus. The Indian cow sanctuary Shree Gopal Gaushala describes a symbiotic cow/human relationship in which

the Cow is the most important animal for developing the human body to perfection. The body can be maintained by any kind of foodstuff, but Cow’s milk is particularly essential for developing the finer tissues of the human brain so that one can understand the intricacies of transcendental knowledge. A civilized man is expected to live on foodstuffs comprising fruits, vegetables, grains, sugar and milk. The Bull helps in the agricultural process of producing grain, etc., and thus in one sense the Bull is the father of humankind, whereas the Cow is the Mother, for she supplies milk to human society. A civilized man is therefore expected to give all protection to the Bulls and Cows. (2)

From Krishna to Family Farmer

In contemporary Western culture, a strikingly similar sentiment can be found in the branding of Organic Valley milk products. The carton design replaces Krishna with a benevolent family farmer affectionately petting a cow. In the modern twist on this narrative, cow’s milk carries forward the ancient notion of nourishing us and giving us vigor and strength. And like the Vedic scriptures, modern day marketing of dairy as essential to good health reinforces our dysfunctional dependence on drinking mother’s baby formula as adults.

Author Will Tuttle tells us that “we cannot bear the thought of growing up and leaving home. Perhaps we long for infancy and the peaceful oblivion of our mother’s breast, and if hers isn’t available, then we’ll use the breast of any lactating mother, even if she’s a cow and we have to kill her babies to get to it.” (3) 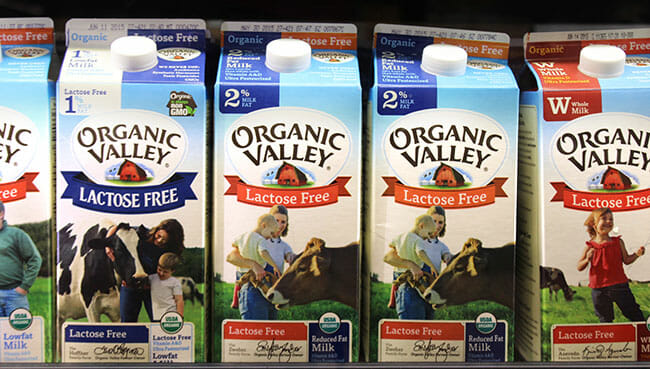 Why Consent is a Myth

Narratives and descriptions claiming that animals make sacrifices for us date back to our earliest recorded history and would have us believe that animals give their consent to being violently killed for a “greater good,” such as to provide us with sustenance or at the request of a higher power. However, to sacrifice oneself means to exercise consent, to act freely, to make a conscious choice from a variety of circumstances.

For example, upon seeing a woman being attacked on the street, we weigh the options of our next moves carefully in the interest of all parties concerned. We could go and call the police, or we could try to intervene and risk also being attacked. We may decide that the latter is a sacrifice we’re willing to make because we feel compelled to act to save the victim. Another example is the soldier who, out of loyalty to his country, claims he is willing to sacrifice his life to defend his country. Even the most passive or symbolic sacrifice means that you consciously surrender, by choice, to another, perhaps to a loved one or to a higher power, in the form of worship or devotion.

But farmed animals who are exploited as resources are neither acting on their own free will, making a choice, or communicating their consent to being subjugated, enslaved, and killed. It is impossible to fairly describe such a situation as a sacrifice. What we do know for certain, based on observing their emotions and reactions, is that all animals, including ourselves, have a tenacious will to live and a willingness to go to great lengths to preserve their own lives, those of their immediate family, and even those of members of their extended social groups.

Even for indigenous people, who live on subsistence hunting and gathering and who kill animals for food out of necessity, the necessary act of killing does not constitute a sacrifice. Author and law professor Sherry Colb describes this as “a ritual of denial,” (4) a ritual intended to absolve the guilt one feels for having caused another sentient being harm.

“Indigenous people — like us — created ways of coping with their own violence against animals through rituals of denial. Some indigenous hunters have given thanks to animals for gifts the animals never consented to bestow . . . ,” writes Colb. “We have consumed the flesh and secretions of animals in restaurants carrying the names and images of ecstatic, celebrating versions of those same animals painted on the entrance.” (5)

Whether in the past or in the present, the notion that animals are willing to be harmed or killed as a sacrifice to us is not only anthropomorphic but also a powerful testament to how our remorse for inflicting suffering on others can drive us to deep levels of self-deception. 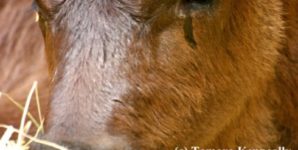 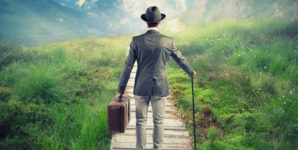