How I Came to Adopt Doris

In April of 2009, I went to visit my friend Alfredo on a chilly and rainy Sunday morning and found a flock of 19 chicks in a brooder on top of his dining room china cabinet. He explained that they were the result of his school’s egg hatching program. All the kids wanted to know where the chicks would go now, but no one seemed to have any answers.

Alfredo was scrambling to adopt them before the school would return the chicks to the hatchery where they would face an unknown future. No one asks what happens to them (except the children). Having never raised chicks before, I was completely unprepared for the decision I was about to make. I reached into the brooder and randomly selected three chicks: one white, one black and one red. And I never looked back at the ones I had to leave behind.

Some educators and school administrators seem to think that chick hatching educational programs teach children the miracle of life and a respect for animals. The problem with this well intentioned yet misguided belief is that children learn only part of the reality. But the really critical component is absent: the relationship between the mother hen and her young chicks. In fact the true miracle here is not the act of a chick hatching in solitude from an inanimate egg, but the wonder of a mother nurturing the newly hatched chick, the complex set of social and survival skills that mother hen lovingly and diligently teaches her young and the intimate interaction between the two. Instead of learning this truly magnificent experience of a mother and her young, the children leave such an experience confused and asking a lot of questions, like what happens to these poor little orphans? Where are their parents? Where is their real home?

Doris, once the red chick I had adopted, soon blossomed into a gorgeous adult red hen. She and I have developed a very special bond over the last year that is evident to all who witness it, the closest I have experienced with another non human animal. When she sits in my lap, she purrs like a kitten and closes her eyes. My one concern for her is that if something were to happen to me, she’s so attached to me I fear she would feel lost without me. Or is this my ego talking?

This summer Doris began to look and feel a lot heavier to me, particularly in her abdominal area. She was low in energy and enthusiasm and out of character in general. One morning as I brought treats out for the flock, Everyone came running to greet me except Doris who I later found hiding under the coop in the dark, breathing heavily and looking sickly. That was the last straw in a series of suspicious behavior, and I brought her into the vet that same day.

Fortunately I have a local vet that has specialized with birds for over 30 years. He quickly evaluated her condition. It was much worse than I had imagined. In fact without treatment her chances of survival were grim. She would remain in the hospital for what amounted to eight days and undergo many unsuccessful treatments which led to a “last resort” yet successful surgical procedure that was equivalent to removing one-third of her body weight.

I asked Dr. Sakas a lot of questions and did a lot of research online about her condition. Doris’ reproductive system had essentially malfunctioned, shutdown. She had accumulated masses of infected egg material that were pressing against her lungs and other vital organs. This material was not passing with steroid and other injection treatments. The only hope for her was surgical removal of this blockage, but even then the prospects were risky. As Dr. Sakas explained, sometimes the egg material is so bound to the vital organs, it becomes too risky to remove at which point euthanizing the bird while still under anesthesia is the only humane course of action.

Searching for Causes to Doris’s Disease

I was determined to understand what caused Doris’ condition so I delved into online chicken forums, poultry health sites, and other authoritative sources for poultry welfare, such as United Poultry Concerns (upc-online.org). I quickly concluded that

The poultry industry, where birds are mere commodities, openly documents this and other conditions and views them as a “cost of doing business.” While I found little hard evidence for the number of birds afflicted with Doris’s specific condition, I could only imagine how many millions of hens developed it. The industry calls them “spent hens.” Rehabilitating a sick hen is unheard of in this case. Birds that stop or even experience reduced egg production are worthless to the industry, not even worth enough to send to the slaughterhouse. But for those spent and ailing hens that do get hauled off to slaughter, they will end up in pet food or lower end processed and fast foods.

Hens today are bred to produce up to 300 eggs a year—in grotesque contrast to their counterparts still in the wild that hatch eggs only once or twice a year, in an average 10-year lifespan. As a result, their reproductive systems shut down after a year to a couple of years. At this point they become a liability to farmers. The methods of disposal of spent hens is the most cruel and shocking secret of the egg industry and perhaps of all animal agriculture. I will not elaborate on the details here.

Why Eggs Are Not Humane

Armed with this knowledge, I can now say with confidence that eggs are not humane in any way shape or form. I don’t care whether they are labeled “pasture raised,” “organic,” or “free range.” The way the hens were raised is only part of the reality that we have been exposed to as consumers. The more hidden reality is of course the breeding technologies that have doomed hens to a drastically short life of intensive egg production and in this short life, a high likelihood of suffering due to diseases brought on by such breeding.

The irony is that we worry so much about GMO crops and pesticides in our fruits, vegetables and grains and yet we have completely overlooked the most modified species in our food chain, the chicken, which has also ingested all of the GMO and pesticide contaminants from grains it has eaten throughout its life. And these contaminants are highly concentrated in their eggs and meat that we so frequently consume.

Who Says We Need Eggs?

The good news is that we don’t need eggs in our diet. We may want eggs, but when we do without them for a few months, it’s amazing how remote and even strange the prospect of eating eggs seems to us. In demystifying the egg, we begin to see the egg for what it really is: the product of the hen’s menstruation, not some velvety Bernaise sauce we used to drool over. It’s easier than ever before to substitute eggs in cooking and baking. I believe we can and will evolve to a diet free of eggs and other animals products, if not by choice, then by necessity, to prevent looming environmental and human health disasters.

The happy ending to this story is that Doris’s recovery amazed the vet, the animal hospital staff and of course myself. Her remarkable recovery is a testament to her resilience and will to live. Perhaps the fact that she knew how much she was loved and valued helped her through this as well. And it’s precisely that love that drives my urgency to share the truth about hens and eggs to all who will listen.

Get Our Newsletter
Posted In: Farm Animal Welfare
Tagged With: Chicken Rescues, Eggs 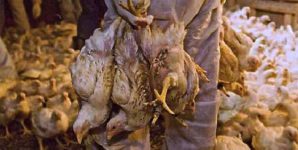 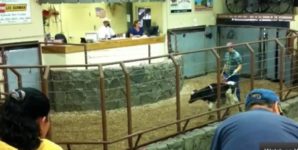