The industry that grinds up billions of male chicks, rips out the testicles of newborn piglets, and anally electrocutes unwanted dairy calves as a method of killing is now telling us that such cruel practices could become a thing of the past, thanks to the revolutionary Crispr gene-editing of farmed animals. The idea here is that geneticists create all or mostly single-sex herds and flocks, breeding only the sex that is needed or most profitable to the exploiter industry. So, for example, the beef industry wants big “beefy” males that render the most meat and profit. The dairy industry uses only females for as long as they can abundantly produce milk, all while killing off unwanted males. The creators of the Crispr dairy cow which Vice News featured in its YouTube video boast that these “supercows sell for six figures.” Notice how the economic agenda always lurks behind the false humane narrative.

So far, they tell us, there are no known adverse effects to the animal test subjects. As usual, the scientists are downplaying the negatives in their zealous ambition to be among the first to successfully demonstrate the technology. In their rosy view, it is also taboo to address the fundamental ethical issue of controlling the reproduction of other animals.

What’s worse, the media is eating it up as we see in this recent Wired story. Journalists who would otherwise be trained to look at other perspectives — like perhaps one not purely motivated by profit and ego in this case — suddenly become cheerleaders for these breeders and scientists, offering us no critical evaluation of the issue. It never occurs to them to ask why using such technologies on human subjects evokes a huge ethical debate while we praise the same practice on non-human animals and ignore any serious ethical considerations.

Some will defend Crispr by invoking the false dilemma that is embedded in the industry narrative. They will say that millions of male baby chicks NOT being born in egg hatcheries will spare an immense amount of suffering, an argument which assumes that the egg industry is necessary and inevitable. But we know such industries are not at all essential. Quite the contrary, our survival may very well depend on the end of these industries, if only to avert a climate emergency. And even if there was no climate emergency and these products were essential to our health, it is just wishful thinking to believe that an industry that thinks nothing of grinding up male chicks would suddenly have a change of heart and want to develop a technology out of compassion and not profit.

Now Crispr technology may very well be used for noble causes like curing diseases in humans, but when it is used to champion the cure for tuberculosis in dairy cows who are artificially bred and only exist as resources to profit the dairy industry, it lands on the wrong side of history.

Please take action and email Wired with your thoughts on their puff piece about “the Crispr cow”!

Get Our Newsletter
Posted In: Genetic Engineering 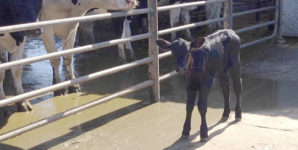