“It looks like one [pig] was non-ambulatory (could not walk). Others were covered in scratches. They were all very small, very young. One of them really seemed to enjoy rubbing [his nose] against my hand. It was hard. And I told them that I was sorry.” — young woman in the Toronto Pig Save video

This short, non-graphic video clip, “Bearing Witness,” depicts Toronto Pig Save’s vigil at a stoplight corner on the morning of January 22, when the temperature was -12ºC but the wind chill factor was -20ºC. For the pigs in the uninsulated, ice-covered metal transport trailers, the cold is accentuated by winds whipping through the open windows as the trucks barrel down the highway. Trucks traveling 80 kilometers/hour would, according to Agriculture and Agri-Food Canada, create in these trailers a wind chill factor of an unbearable -40ºC, adding even more misery to the occupants’ already horrific journey. As a result, many of the pigs shown in this video appear to be suffering from hypothermia and frostbite. Their calls of distress reveal extreme physical and psychological discomfort.

Toronto Pig Save’s vigils are held weekly near slaughterhouses in the area. At these vigils, TPS volunteers often hand out free vegan food and literature to passersby. The group always welcomes new volunteers to join them in bearing witness, in comforting the pigs, in leafleting, and in taking video footage and still photographs. 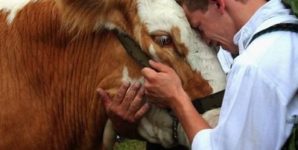 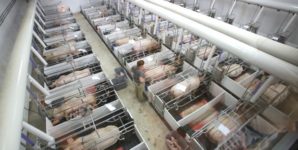 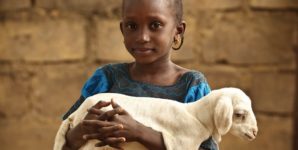