The following is a letter I wrote and sent today to the Goodman Community Center in Madison, Wisconsin after discovering a small flock of backyard chickens behind the building. The conditions under which I found these hens living is a good example of a widespread problem in our society with regard to the growing trend of keeping backyard chickens. It all starts with misconceptions about who these birds really are and too often ends in tragic consequences for the animals.

My name is Robert Grillo and I am the founder and director of a non profit 501c(3) organization called Free from Harm. As part of our mission — and which relates directly to my purpose for contacting you — we rescue, rehabilitate, rehome and advocate on behalf of chickens. The chickens we rescue come from backyard urban environments who were picked up by Chicago Animal Control and Care (a kill shelter) and those who have escaped live poultry markets.

Let me first tell you what a beautiful facility Goodman is! The architects and builders who resurrected this old factory did magnificent and creative work. It’s like walking through a museum. I imagine a lot of funds were invested in what looks like a multi-million dollar project. And I’m sure Goodman garners a lot of pride in the community. That’s why I found all the more tragic the conditions of the chicken coop and enclosure that houses your three hens behind the building.

I’d like to preface what I am about to write by just stating up front that my motivation for contacting you is out of a serious concern for the safety of the lovely chickens that are residing at Goodman. I think that your intentions of keeping them are likely good ones; however, these hens are incredibly vulnerable to predator attacks, based on the poor construction of the coop and enclosure. Aside from the urgency of this danger from predator invasion, there are some other welfare and ethical considerations that I would like to point out. But first the predator issue.

Chicken wire and construction issue. Chicken wire is designed to keep chickens contained to a certain space, not as an effective barrier to keep predators out. The predator-proof material to use in place of chicken wire is a high-grade hardware cloth.

General construction. The chicken wire in your enclosure is fastened to very flimsy pieces of wood framing that wobble to the touch. If a raccoon were to climb on top of this, I wouldn’t be surprised if the framing cracked under his weight. The best construction is to build your frame with 2-by-4s and drill the hardware cloth into the frame with washers to secure it firmly against the frame.

The roof. I was shocked to find that the roof of the enclosure could easily be lifted with a finger or two on one end. It would be equally effortless for a raccoon, opossum or fox to do just what I did with their strong paws and arms and lift the roof enough to enter the coop from above.

The run area. While not necessarily a safety issue, it was quite sad to see how the floor of the chicken run was completely covered with chicken wire also, leaving your birds no way to dustbathe or even scratch. Dustbathing is one of the most important rituals in a chicken’s life, an effective defense against parasites as well as one of her most pleasurable experiences. Scratching is one of the most fundamental chicken behaviors, allowing them to find small stones and insects that enrich their diets. Scratching is also essential for the hen’s well being, providing part of the daily physical exercise they require to maintain their health, and fulfilling powerful instincts to express seeking behaviors.

Instead, your hens have nothing to walk on except thorny and wavy chicken wire with ample opportunity for their feet to get stuck in between the wiring. I’m guessing you covered the floor with the wire thinking that this would provide better protection from predators. The same objective can be accomplished by simply burying the hardware cloth about 8” below ground level along the perimeter of the enclosure.

The ‘Cool’ Factor of Backyard Chickens

It is of late very fashionable, in large part because promoted as more sustainable, to keep heritage breed hens for the purpose of consuming or selling their “local” eggs.

Many are seduced by the backyard chicken craze, so I am not singling you out. But regardless of your reasons for acquiring these hens, I see poorly constructed coops and unhappy chickens who are denied their most basic interests and desires because of their owners’ ignorance. As someone who has personally rescued a number of unwanted backyard chickens from kill shelters, I can tell you from personal experience and research that we are facing a looming animal welfare fiasco that impacts millions of birds as a direct result of this craze. (2)

The Hatcheries Deep and Dark Secrets

Public perceptions are at the source of a widespread problem in our culture that promotes a fixation with chicken eggs with little interest in knowing the birds who lay them and the price they pay for being engineered to lay three times the number of eggs that their bodies were designed for. The tragic reality is that chickens are promoted as disposable egg-laying machines by both the factory farm and hobby farm industries alike. In fact, the same hatcheries that supply chicks to factory farms also supply mail order chicks to backyard chicken keepers. One of the more popular hatcheries, Ideal Poultry Breeding Farms, boasts on its website that it ships close to 5 million chicks a year. (1)

I bet you’ve heard about the horrors of the hatcheries — the killing of millions of male chicks, the “parent hens” who are forced to repeatedly mate with roosters to produce fertile eggs, the artificial incubators where chicks are hatched in the absence of their mothers, the genetic and selective breeding technologies that force hens to lay more and bigger eggs and are linked to a host of life-threatening conditions. But in case you haven’t, please see Egg Facts: What the Industry Doesn’t Want You to Know for just a sampling of some of their worst practices.

The Story of Lucinda: a Case in Point

Lucinda is a small hen who was found wandering the city streets of Chicago and brought to a kill shelter where we rescued her the other day. She is showing signs of progress — eating and drinking water on her own — after 24 hours under the care of a vet who, upon initial examination, found her on the brink of starvation and collapse and infested with thousands of biting mites that were sucking her blood and making her severely anemic. The lesson we can and should learn from birds like Lucinda is that, even when raised under the best circumstances, there are just far too many artificially bred chickens out there.

Close to 300 million birds just like Lucinda are artificially bred into existence for commercial egg farming in the U.S. every year. They will only lay eggs for a short window of their lives and are then sent to slaughter at a fraction of their natural lifespan. There will always be many casualties like Lucinda as long as we promote and demand eggs of any kind — organic, free-range and cage-free included. Yet we have no biological need for eggs of any kind — neither chicken eggs, duck eggs, robins eggs or turtle eggs, for that matter.

For those who wish to keep chickens, I recommend adopting from shelters and sanctuaries. Please don’t support breeders and hatcheries, the source of the overpopulation problem with chickens like Lucinda.

Thank you for considering my position and I look forward to your reply.

For those who would like to send additional comments to Goodman, please contact Becky Steinhoff, Executive Director of the Center, by email at [email protected] or call 241-1574 x225.

(1) See video of Angelica for details. 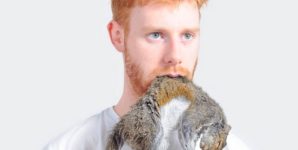 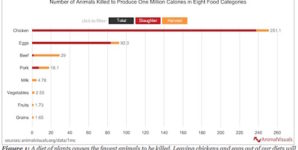 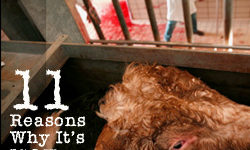