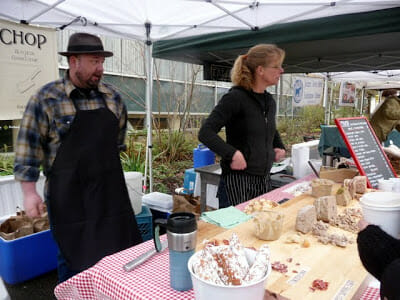 Humane washing takes many forms. On the smallest micro level, it sometimes crops up in your local farmer’s market. That’s where I found a new vendor in between the mushroom stand and the dainty little baskets of fresh berries at my local outdoor market that claims to sell “responsibly-raised” lamb, veal, chicken — all animals who are killed as infants. How is killing babies responsible?

When you live in a neighborhood of a major metropolitan center composed primarily of college-level baby boomers, the farmer’s market becomes a mecca for changing perceptions and attitudes about conscious eating. It’s good to have local beets brought in from the suburbs, but I know for a fact that those local chickens come from the same place in Northwest Indiana as the live ones I encountered last month at a live poultry market, the biggest hellhole for animals I’ve ever seen.

This is a neighborhood that boasts three major ice cream /yogurt shops in one busy block. I often sit facing the window at the corner coffee shop watching passersby licking ice cream cones, tongues wagging in and out, reminding me of childhood innocence in a cone. It tastes good, and deep in our subconscious, we are experiencing an infantile fantasy. We don’t experience this pleasure by visualizing the reality of what we’re eating, but instead by blocking it out. We don’t see the cows confined to milking stalls with concrete flooring, whose inflamed udders are hooked up to computerized milking machines, or the wailing calves torn from their mothers at birth to be thrown in a dead pile or fed a few weeks for veal.

The subtle, vague message that legitimizes the otherwise horrid reality of killing baby animals (shackling them by the legs, hoisting them upside down and slashing their throats) seduces most people here at the market. The animals are local, humanely-raised and allegedly living on small farms run by people who claim to care about animals — at least as long as is necessary to raise them to “market weight.” None of this is in writing anywhere. All of this is assumed by people who really want to believe it is possible. All this from two words: “responsibly-raised.”

I hope to pick up the slack for those who still might have some nagging doubts about these two powerful words that conceal a vast and sordid mythology about humane meat. In fact, I’ve compiled a collection of articles from some of the authors I respect most on the subject of humane-washing, and some written by yours truly. Among these, I find Ashley Capps’s article, “A Closer Look at What So-Called Humane Farming Means,” to be the most concise introduction to the issue.

Get Our Newsletter
Posted In: Animal Products and Culture
Tagged With: Humane Farming