Subscribe
Home > Animal Products & Psychology > What Can Happen When a New Vegan Talks to Family?

If your passion for animal rights and veganism is relatively new, you’ve probably already discovered that mainstream culture has a lot of resistance and built-in defenses to believing why things shouldn’t change. In fact, it’s very common to find people defending the very systems that exploit animals, workers, communities and the environment — even when this goes against our own core values and collective interests. And it becomes even more challenging when that person is a member of your immediate family.

At my recent workshop on Overcoming Objections to a Vegan Diet, I met a soft-spoken, warm and unassuming young lady named Jenny who wrote me a few days later. She wanted to tell me that she got a lot out of the workshop and applied some of the ideas she learned to a conversation with her brother.

Jenny is a new vegan. She explains that her exposure to veganism began with a friend who peaked her interest in a raw vegan cooking class. This led her to investigate the other reasons people go vegan. She saw films like Vegucated and quickly realized how enormous the ethical implications were for animals which solidified her resolve for going vegan.

Jenny came to my workshop admitting that she struggled with how to reconcile her new found passion for a vegan lifestyle and animal rights with the common reactions from friends and family which were not always supportive, to say the least.

While some might resign to the popular notion that eating animals is a personal choice, Jenny chooses not to internalize her beliefs and instead seeks to make it a highly visible part of her identity. She wants to have a positive impact so she reaches out to her social networks online and invites discussions with family, friends and acquaintances.

One case in point was the recent conversation she had with her brother whose first reaction about her recent trip to a farm where she got friendly with a cow was mockery. The idea of giving a cow attention or sharing an affectionate touch was just plain nuts to him. Jenny said things could have gone downhill really quickly at that point but she regained her composure.

She explained to him in a sincere and nonconfrontational manner what she has learned about farmed animal cruelty in standard farming practices and how this has really transformed her thinking about food. Her brother’s tone became empathic and inquisitive. He began asking her a lot of questions about her vegan diet. He recalled being horrified by what he saw in the documentary Food, Inc. He even admitted to her that he has been thinking about eating less meat. In the end, he expressed how proud he was of her for her new found passion and says he’s going to be giving this a lot more thought.

In the end, Jenny felt really satisfied about the outcome of this conversation which could have gone a very different route and left her feeling frustrated and resentful of her brother. 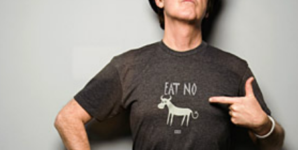